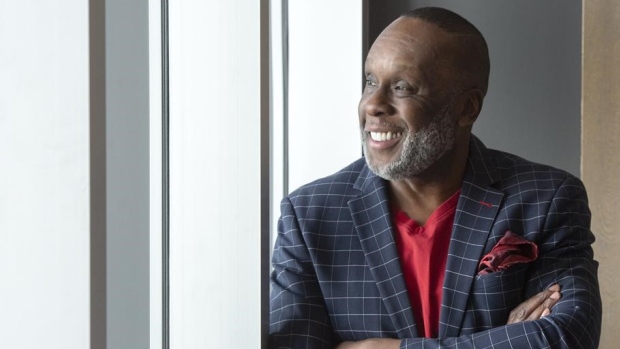 Canada climbed the podium 24 times in Tokyo to finish 11th in total medals, despite facing some of the tightest COVID-19 restrictions in prior months of any country competing. And the pandemic meant no fans were permitted in Tokyo.

Surin, who was part of Canada’s 4x100-metre relay team that raced to gold at the 1996 Atlanta Olympics, was named the Canadian team’s chef de mission for the 2024 Paris Olympics on Friday, and reflect on the unique Games last summer.

The 54-year-old worked as an analyst for the men’s 100 metres as part of the French TV broadcast, and went to Tokyo’s Olympic Stadium the day before the final.

“I thought, oh my god, this is going to be crazy. No spectators, and the ambience is going to be so bad,” said Surin, who was also in Tokyo in a role with sponsor Hudson’s Bay Company. “And then I witnessed world records, and also seeing Andre (De Grasse) win bronze in the 100 metres with a P.B. (personal best), gold in the 200 … that shows us although there was a big problem with COVID, the athletes showed that yes, we can get through it, and that was a big inspiration for all people, and gave us courage to move forward.”

The chef de mission, or “head of mission,” is an ambassador for the entire team leading into and during the Games. Surin is excited to help guide Canada’s athletes.

“Since my retirement, I always said to myself that I’d like to work with athletes, to share experience with athletes, to play the role as a mentor to athletes, to the next generation,” Surin told The Canadian Press. “And I always want to be involved in the Olympic movement. Having this opportunity, and to me it’s like a big gift, and I’m really looking forward to working with the athletes and the COC (Canadian Olympic Committee).”

Surin is a four-time Olympian making his debut as a long jumper in 1988. Since retiring soon after the 2000 Sydney Games, he's barely missed a beat, working every Olympics since as a broadcaster.

Surin, who was born in Cap-Haïtien, a small Haitian city, and moved with his family to Montreal when he was seven years old, was Canada’s chef de mission at the 2018 World Youth Olympics in Buenos Aires.

“I really loved it, and I told the COC that was something I’d like to do (again) in the future, and the occasion came, and I was jumping in the air,” Surin said with a laugh.

Surin said he’s excited to have a couple of years to cheer on athletes, not only in track and field.

“I told the COC I want to go to all the competitions, I want to learn about the athletes and be with them through Paris, and it’s a big privilege to be a part of that from now on,” he said.

Once a role given to Canadian sport administrators, the volunteer chef de mission position is now filled by former Olympic athletes. Canadian speedskater Catriona Le May Doan was Canada’s chef at the 2022 Beijing Winter Olympics, while rower Marnie McBean held the position at the 2021 Tokyo Games.

In addition to mentorship, the chef de mission deals with Canadian team issues that can erupt into a firestorm. McBean guided the team through one of the rockiest times in Olympic history, after the Games were postponed a year due to the pandemic.

Surin said he’s keen to reach out to the previous chefs for feedback.

The member of Canada’s Sports Hall of Fame, the Canadian Olympic Hall of Fame and Quebec’s Sports Hall of Fame has remained active in sports. He has his own foundation, clothing line, and business as a corporate team-builder. His Bruny Surin Foundation to help promote healthy and active lifestyle to young, has awarded $20,000 in scholarships yearly to student athletes.

The COC said he was chosen not only for his accomplishments on the track, but as a philanthropist, motivational speaker and role model for young athletes.

“From his incredible athletic achievements to his exceptional work in the community, Bruny is a true ambassador for sport. His infectious passion for sport and teamwork will serve him well in his role as Chef de Mission,” four-time Olympian and COC president Tricia Smith said.

Surin was also a sports dad. His daughter Katherine was one of Canada’s top 400-metre runners, narrowly missing a spot on the team for Tokyo. She’s completing her MBA at Laval University., Kimberley Ann, another daughter, was a tennis player and is now a documentary filmmaker.