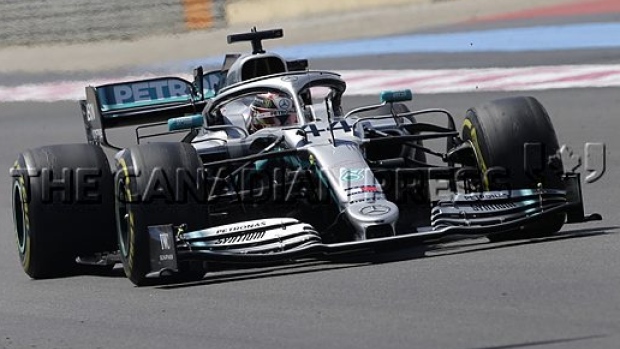 The Canadian Grand Prix has become the latest major sports event in the country to be postponed due to the COVID-19 pandemic.

The Montreal-based Formula One race was scheduled to take place June 12-14 before Wednesday's postponement.

Formula One said it hopes to reschedule the event this year.

Race organizers said in a statement that they were "saddened" to postpone the race and that the decision was made in consultation with Formula One and representatives from the City of Montreal, Tourism Montreal and provincial and federal governments.

"This postponement was not a decision that was taken lightly or easily," the statement said.

The postponement came hours after the CFL pushed back the start of its regular season in June. Last week, another major Canadian sports event scheduled for June — the Queen's Plate at Woodbine Racetrack in Toronto — also was postponed.

The RBC Canadian Open, June 11-14 at St. George's Golf and Country Club in Toronto, remains on the PGA Tour schedule but Golf Canada and RBC said in a joint statement last week they are evaluating their options.

The Canadian Grand Prix attracts one of the biggest crowds in Canadian sports each year. Last year's three-day event had an announced attendance of 307,000.

Canadian Grand Prix president and CEO Francois Dumontier says certain government decisions, like keeping non-essential businesses and the Canadian border closed, left them with no choice but to postpone the race.

"The majority of businesses who work with us are non-essential. That would've put in peril our chances to hold the race if it happened on June 14th."

"It is a difficult decision because Montreal is a known destination for world class events and festivals," Plante tweeted. "And we will be there to support our partners."

The call on the race came sooner than originally expected. On March 24, Dumontier said he expected a decision between Easter and May 1.

When asked about a possible postponement last month, Dumontier said he hoped to hold the event toward the end of summer or the start of fall if it couldn't be run on its traditional June dates.

Canada was originally scheduled to be the eighth race on the Formula One schedule. The first seven races previously were postponed or cancelled.

The Canadian promoters said they "would have been honoured to host the first race on the 2020 Formula 1 World Championship calendar."

Dumontier, however, accepts they may have to wait until later in the year to host the Grand Prix.

"The calendar will be turned upside down," Dumontier said. "We're used to starting the summer with the race in June. We've had it in June since 1982. We'll have to make some concessions to show we are flexible. Maybe we will have to have it in the fall, it'll be colder."

The announcement comes after F1 said it was working with promoters on a revised 2020 schedule.

"We have been working closely with our friends at the Canadian Grand Prix over the past few weeks and support them in taking this necessary decision to ensure the safety of fans and the F1 community," Formula One CEO/chairman Chase Carey said in a statement.

"We always look forward to travelling to the incredible city of Montreal and while we will all have to wait a bit longer, we will put on a great show when we arrive later this year."

Organizers say purchased tickets will remain valid and spectators will be informed of their options once the race is rescheduled.

Two Canadian drivers — Lance Stroll of Montreal and rookie Nicholas Latifi of Toronto — have Formula One rides this season.

Stroll's Racing Point team and Latifi's Williams squad both announced Monday that their drivers are taking pay cuts with some staff going on furlough. The Williams pay cut for drivers is 20 per cent, while Racing Point did not disclose an exact figure.

The Canadian Grand Prix made its debut in 1961 in Bowmanville, Ont., and has, save three separate one-year breaks, been part of the F1 calendar since 1967.

"Conversations have been ongoing with Exhibition Place, City of Toronto, Honda Canada and IndyCar with the intention to hold the event on the originally scheduled date as planned," the race said in a statement.

"The event is subject to the guidance and mandates of federal, provincial and municipal authorities regarding public gatherings and travel. The health and safety of all associated with the Honda Indy Toronto will remain the priority."

This report by The Canadian Press was first published April 7, 2020.