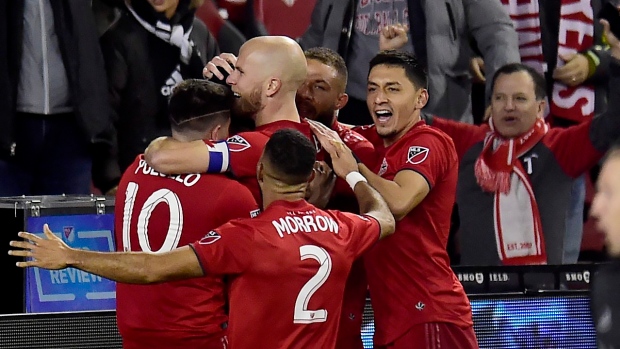 TORONTO — In its first playoff game since winning the 2017 MLS Cup, Toronto FC showed resilience and character in spades.

"The response, the mentality to not let that (tying goal) faze us, to regroup and be ready to go again. That part was a sign of a big team," he added.

Toronto, which extended its unbeaten run to 11 games (5-0-6), had seemed destined for victory thanks to Marky Delgado's 32nd-minute goal. But that all changed three minutes into second-half stoppage time when Argentine midfielder Lucas Rodriguez swept in a Rooney corner after Frederic Brillant nudged the ball over to the far post.

The goal silenced the announced crowd of 25,331 at BMO Field. Then Toronto took over in extra time.

"There were, for lack of a better word, some pissed-off guys going into overtime," said DeLeon, who had been tasked with marking the man who scored the equalizer off the corner. "So some very motivated guys. And I think it showed."

Laryea beat D.C. goalkeeper Bill Hamid from close range three minutes into extra time after Michael Bradley stole the ball and fed DeLeon, who slipped the ball to Laryea. Two minutes later Drew Moor — who like Laryea had come in off the bench — headed an Alejandro Pozuelo corner into the goalfront where Osorio banged it in amidst a scrum of bodies.

Pozuelo then spotted Osorio steaming towards goal and the Canadian midfielder hammered a volley from just inside the penalty box. DeLeon, a former D.C. United player, made it 5-1 with a swerving shot from distance after a Pozuelo corner.

Toronto moves on to New York to face a rested NYCFC on Wednesday. The top team in the East, which finished 14 points ahead of TFC in the regular season play, has been off since Oct. 6.

Toronto blanked NYCFC 4-0 at BMO Field on March 29, when Pozuelo dazzled in his MLS debut with two goals and an assist. The teams tied 1-1 at Yankee Stadium on Sept. 11.

"We're confident that the matchup makes sense for us," Vanney said of NYCFC. "Now we've got to recover. We've got to get everyone to the best possible physical state. I think mentally we're in a great spot."

TFC was without star striker Jozy Altidore (quad) and influential centre back Omar Gonzalez (hamstring) on Saturday. Fellow centre back Chris Mavinga limped off in the 107th minute.

Toronto had made three substitutions before the tying goal so Vanney was forced to rejig his formation into a 3-5-2 — with Pozuelo and DeLeon up front — as TFC went for the win in extra time.

The visitors didn't manage a shot on target in the first hour but finished with six on 14 attempts as they came alive in the second half. Toronto launched 28 shots, with 17 on target.

Credit goalkeeper Quentin Westberg for the stiff defence. He made several key saves, including a wonderful stop on Ola Kamara in the 77th minute when the Norwegian sub was gifted a scoring chance on an awful Nicolas Benezet backpass.

Toronto went ahead in the 32nd minute when Hamid spilled a dipping Pozuelo shot from outside the penalty box. The rebound went to Delgado, who beat Steven Birnbaum to the ball to tuck it in.

Rooney, meanwhile, said goodbye to MLS with the loss, exiting after the first half of extra time. The 33-year-old, who managed 23 goals and 15 assists in 48 regular-season games for D.C. United, is returning to England to join Derby County.

Rooney, who did not speak to the media after the game, had two excellent scoring chances midway through the second half but was stopped both times by Westberg.

The D.C. attack was toothless in the first half, however. Without a shot on target, the visitors brought on Kamara in the 44th minute, with Rooney dropping back.

D.C. finally put a shot on target in the 62nd minute when Westberg easily handled Rooney's shot from distance. Westberg had to make a more difficult one-handed save two minutes later off Rooney and soon after made a reflex save to stop Rooney from close-in

Altidore had been a Toronto question-mark since leaving the Oct. 6 regular-season finale with a quad injury. The more surprising omission was Gonzalez, who had not been listed as an injury concern.

A scan Friday showed a minor strain but Gonzalez failed a fitness test Saturday. "He just couldn't open up into a maximum spring," said Vanney.

Gonzalez could be ready for Wednesday. As for Altidore, Vanney says he is making progress every day.

"With three or four more days, I'm hopeful that he can play a role in this game. I'm just not sure to what extent," said Vanney. "I think we're getting really close to the point that he's going to be ready to give us something."

Laurent Ciman, who had played just 117 minutes in Toronto's previous 12 league games, came in for Gonzalez. Pozuelo was pushed farther forward in Altidore's absence, flanked by Benezet and Tsubasa Endoh.

"There's still a best version of us that we're still striving for and that requires everyone to be healthy and ready to go," said Vanney.

Toronto and D.C. arrived with identical 13-10-11 records with Toronto grabbing fourth place in the East and a home playoff game on goal difference the final day of the season.

Wednesday's Eastern semifinal will be played at Citi Field, home of the Mets, due to the Yankees' playoff run.