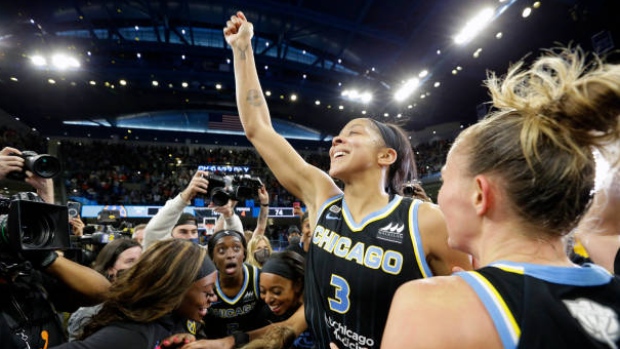 The 2021 WNBA season came to a close on Sunday afternoon as the Chicago Sky completed their impressive run through the playoffs with their first championship in franchise history.

The season was jam-packed from start to finish as teams returned to their home markets for the first time since the COVID-19 pandemic began and an Olympic break saw Team USA win gold once again.

For the Canadians, Kia Nurse fell just short of winning her first WNBA title as the Phoenix Mercury lost in the Finals and her season ended early, having torn her ACL in the opening minute of Game 4 in the semifinals against the Las Vegas Aces.

In Minnesota, Natalie Achonwa and Bridget Carleton helped the Lynx secure the No. 3 seed in the regular season but like Nurse and the Mercury, their season was ended by the Sky in the second round.

Here are four takeaways to wrap up the 2021 season.

On paper, seeing a team that went .500 in the regular season take home the championship at the end seems improbable but the Sky were no ordinary team.

An up and down regular season had the Sky come into the postseason as the sixth seed. However, Chicago dug deep and their journey to claiming the title was impressive, dispatching the No. 7 Dallas Wings, No. 3 Lynx, No. 1 Connecticut Sun and No. 4 Mercury along the way.

Candace Parker’s decision to sign with her hometown Sky paid off. Between her on-court exploits and leadership, she proved she was the missing piece to get this talented Sky squad over the hump.

Kahleah Copper took home Finals MVP and it was well earned. Averaging 17.7 points and 5.3 rebounds in the postseason, Copper raised her game to new heights in the playoffs as her game on both ends of the floor played a critical role.

The championship was also a big crowning moment for franchise mainstays Courtney Vandersloot and Allie Quigley. Vandersloot, who has been consistently underrated her entire career despite being one of the best point guards in the game, averaged 10.2 assists in the postseason.

Quigley, who also hails from the Chicago area, shot 36.5 per cent from three in the playoffs and averaged 15.2 PPG, second only to Copper on the team. The Sky don’t win the title without the contributions of Vandersloot and Quigley.

The No. 1 pick in 2020 by the New York Liberty, Ionescu started her career with sky-high expectations. She showed glimpses of it in the bubble in 2020 but was done for the season after three games due to an ankle injury.

The expectations did not wane coming into 2021. She started the season hot, including 25- and 26-points performances early on.

Dealing with an injury midseason, Ionescu’s production dipped in June and July before ending the season with 11 consecutive double-digit point games. In her lone playoff game, she had 14 points and 11 assists in the first round against the Mercury.

In what was her first full season in the WNBA, Ionescu, who averaged 11.7 PPG, did not break out as a big-time scorer consistently but she finished third in the WNBA in assists per game at 6.1, behind only Vandersloot and Washington’s Natasha Cloud.

Betnijah Laney currently holds the crown as the best player on the Liberty but the expectations on Ionescu to establish herself as a bonafide superstar in the league will be even higher in 2022.

With the playoffs completed, focus now turns to the off-season. While many players have gone or will go overseas to play, the possibility that some of the WNBA’s best could potentially change addresses by the time next season starts is real.

While some like Stewart, Quigley and Vandersloot are unlikely to leave, there is the possibility some of the others could find themselves on different teams in 2022.

For Loyd, who has won two titles in Seattle with Stewart, perhaps another team could offer her a maximum contract and a bigger role.

For the likes of Charles and McCoughtrey, who are closer to the end of their careers than the beginning, they have yet to win a WNBA title so far in their illustrious careers. A shot at a championship is very likely the priority here.

In Copper’s case, she will undoubtedly get a raise after her playoff performance and has the trophies to prove it. But will Chicago be the one to give it to her?

The WNBA doesn’t see a lot of movement when it comes to franchise-level superstars changing teams, especially in comparison to the NBA. More recent examples include Parker signing with the Sky or Elena Delle Donne being traded from Chicago to Washington in 2017.

Coming into the season, the 2021 rookie class was not considered to be a strong one as it lacked a surefire superstar at the top of the class and lacked the overall depth in comparison to other years.

Overall, this year’s class struggled as many draftees had trouble seizing roster spots or getting a lot of playing time. However, it wasn’t all bad as the five players who made the All-WNBA rookie team turned in promising seasons.

The Liberty’s Michaela Onyenwere was named the rookie of the year and established herself well in her first year. The sixth overall pick in 2021, Onyenwere became a regular starter in New York, starting 29 of 32 games and ended the season averaging 8.6 points and 2.9 rebounds.

Fellow rookie DiDi Richards also found a place with the Liberty. Averaging 2.3 PPG, she appeared in 31 games after being selected in the second round (17th overall).

Next up was Dana Evans, who had the best ending of all rookies this season. A projected first-round pick, Evans slipped to the second round and was nabbed 13th overall by Dallas. She was dealt to the Sky on June 2, and was a part of the championship winning squad.

In what turned out to be a tumultuous season in Atlanta, Aari McDonald was a bright spot for the Dream. She ended the year averaging 6.3 PPG, 1.6 rebounds and 2.0 assists. McDonald led all rookies in assists with 59 (next best was Evans at 30) and steals (25).

Rounding out the All-WNBA rookie team is 2021 No. 1 pick Charli Collier. She led all rookies in total rebounds with 102 and was fourth in PPG at 3.4. She started 18 out of 28 games played for Dallas, but averaged just 12.3 minutes per game.

With the WNBA operating with 12-player rosters and sometimes only 11 due to salary cap constraints, it is very difficult for rookies in particular to crack a lineup. The league, which celebrated its 25th anniversary in 2021, has not expanded since 2008 when it welcomed the Dream and it’s time for the league to look into adding more teams.

Along with expansion, the WNBA needs to look into changing its playoff format, as the first and second rounds of the playoffs are currently single-elimination games. Seeing the No. 3 Lynx and No. 4 Seattle Storm eliminated in the second round robbed fans of seeing more quality playoff basketball.