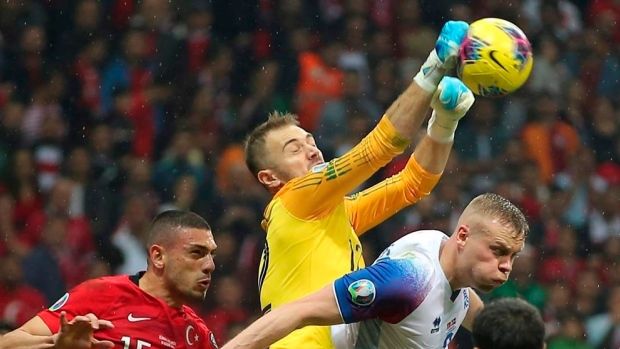 France and Turkey qualify for Euro 2020 , The Canadian Press

England qualified in style for the 2020 European Championship, while the Czech Republic, France and Turkey also booked their places Thursday at next year’s tournament.

England only needed a draw to qualify but Harry Kane scored a hat trick in a 7-0 win over Montenegro, and the Czech Republic also advanced from Group A by beating Kosovo 2-1.

The result also meant that England, playing its 1,000th game, clinched top spot in the group thanks to its record against the Czech Republic. It won 5-0 at Wembley in March before losing 2-1 in Prague last month.

“The important thing is we have qualified,” Kane told ITV after the game. “We've had one slip-up in the whole group and responded really well to the defeat and got the job done.

"We wanted to put on a show in the 1,000th game and the score at halftime (5-0) really showed that. I think we were expected to win the group, as we have done, but football is never easy and there are a lot of upsets.”

Cristiano Ronaldo also scored a hat trick, in Portugal’s 6-0 win over Lithuania, to keep the defending champion in contention for one of the top two spots in Group B.

Iceland’s earlier draw in Istanbul had already ensured France and Turkey were through from Group H.

All three of Kane’s goals came in the first half as the Tottenham forward became the first player to score a hat trick in successive appearances at Wembley — having also scored a treble against Bulgaria in September.

Alex Oxlade-Chamberlain scored the opener in the 11th minute and Marcus Rashford also netted in the first half to help England to a 5-0 advantage at halftime.

After a flood of goals in the first half, the Montenegro net was only breached after the break by Aleksandar Sofranac’s own-goal and Abraham in the 84th.

England will be back at Wembley at the finals, with three group-stage games at the national stadium, which is one of 12 venues being used by UEFA in 12 cities across Europe.

The semifinals and final are also at Wembley in July 2020.

The Czech Republic needed to win to join England but had a scare when Atdhe Nuhiu headed Kosovo into a surprise lead five minutes after the interval.

But Alex Král curled in a stunning equalizer in the 71st and Ondrej Celustka scored what was to prove the crucial goal for the Czechs eight minutes later.

Cristiano Ronaldo hadn’t scored in his last three club matches after playing with a knee injury.

But the Juventus forward showed little sign of any problems as he came to his country’s aid on Thursday, reaching 98 national goals in the process.

It was the ninth hat trick with Portugal for Ronaldo, and the 55th of his career for club and country.

He has 10 goals in seven qualifying matches.

Pizzi Fernandes, Gonçalo Paciência and Bernardo Silva also scored for Portugal, which can qualify with a win in its final Group B match on Sunday at Luxembourg.

The rout against last-place Lithuania gave Portugal 14 points, five fewer than group leader Ukraine — which has already qualified — and one point more than third-place Serbia, which beat Luxembourg 3-2.

Iceland needed to beat Group H leader Turkey to stay in the running for a direct berth in next year’s tournament but drew 0-0.

Hordur Magnusson came close for Iceland, eight minutes from time, but his effort from a corner was blocked on the line by Turkey defender Merih Demiral.

The result meant France had already qualified before its 2-1 win over Moldova.

Vadim Rata fired Moldova into a surprise lead in the ninth minute but Raphaël Varane levelled in the 35th and Olivier Giroud converted a penalty 11 minutes from time.

Also, Albania drew 2-2 at home to Andorra, which hadn’t scored an away goal in a competitive match in more than nine years.