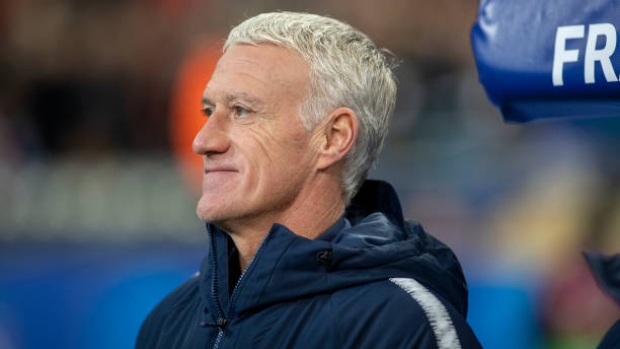 PARIS — France coach Didier Deschamps has extended his contract until 2022, giving him a chance to defend the World Cup title.

Since taking charge after the 2012 European Championship the former France captain has guided Les Bleus to the Euro 2016 final on home soil before winning the World Cup in Russia last year.

That made him one of only three coaches in soccer history to have won the World Cup as both a player and a coach, along with Mario Zagallo (Brazil) and Franz Beckenbauer (West Germany).

“I'm proud and honoured to be the France coach. You know the attachment I still have for what this jersey represents,” Deschamps said Tuesday. “We are world champions (and) you are judged on your results. If France has not had good since results since 2012, I wouldn't be sitting here now."

Deschamps has formed a close relationship with French Football Federation president Noël Le Gräet, and they recently celebrated his national record-extending 100th game in charge. He has the highest number of wins (65) of any France coach, ahead of Michel Hidalgo and Raymond Domenech (tied on 41).

“It seems important for French football that Didier Deschamps stays in charge of the national team until December 31, 2022, in other words until the end of the World Cup in Qatar,” Le Gräet said Tuesday. “Furthermore, there is no arguing with his results (so) it's a very logical decision."

France will again be among the favourites at Euro 2020, with Le Gräet setting Deschamps the usual target of reaching at least the semifinals.

“Our team is among the best in the world today, second in the FIFA rankings,” Le Gräet said. “It wouldn't be very serious not to have high expectations.”

Deschamps is also unique in having both played for and coached France at least 100 times, making 103 international appearances as a gritty but technically assured central midfielder with outstanding leadership and organizational skills. Since replacing former France teammate Laurent Blanc after Euro 2012, he has taken those same qualities into his coaching.

But his new contract is unlikely to be good news for Karim Benzema, the Real Madrid striker who remains sidelined since falling out of favour with Deschamps four years ago in a bitter fallout following Benzema's alleged involvement in a sex-tape scandal.

Deschamps has shown both great loyalty and a ruthless streak, in keeping his faith in striker Olivier Giroud — despite Giroud being left out of the Chelsea side this season — and maintaining his hardliner position in overlooking Benzema despite his outstanding performances for Madrid.

“I'm happy in my job,” Deschamps said. “I have the best French players with a remarkable team spirit. There are many great things still to be done.”