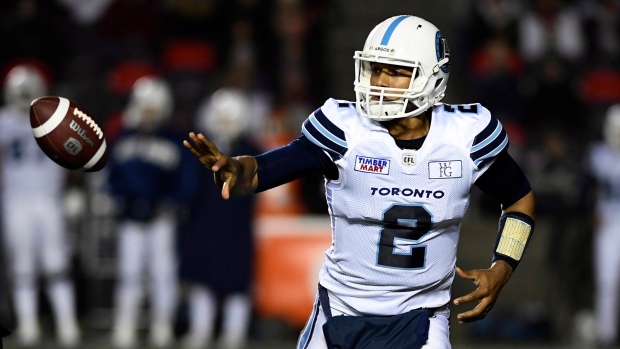 Early last season, after he’d been thrust into the starting role following Ricky Ray’s injury, James Franklin found himself studying the body language of his Argos teammates on their way back to the huddle after an unsuccessful play.

Franklin was looking for signs of their frustration, worried that his teammates were talking to each other about how the failure was his fault.

“If I could tell they were frustrated, it bothered me,” Franklin said. “They might not even say anything to me, but I could usually see if they were upset – see it in their body language or their actions. Then I’d start to worry, ‘Oh man, I’m doing this wrong, or that wrong.’ So those kinds of things, when it comes to football, I’m really trying to work on.’ ”

Franklin has long been aware of his tendency to be a people-pleaser and his desire to be liked by everyone for the positive person he truly is. He’s also familiar with the discomfort he feels when sensing others are upset or disappointed in him.

It had never really been an issue in his football career, from his days as a Texas high school star through his stellar career at the University of Missouri and three seasons as a backup in Edmonton.

But last season was different. Franklin was on a new team, with a bunch of new teammates and a head coach that he was struggling to connect with.

“The thing I didn’t prepare for was the mental side of it,” the 27-year-old said. “Not from the opposing team but my own team and all the stuff with coach [Marc] Trestman and some of the stuff in the media … that’s what I was ill-prepared for and was naïve to think that kind of stuff ... I’m not going to have to worry about.”

Part of the recent off-season for Franklin has been an exercise in personal growth, focusing on managing that people-pleasing aspect of his personality and staying more conscious of his emotions.

“Off the field, that’s definitely who I am, trying to make everyone happy and worrying if someone’s feelings are hurt – I want to see if I can do something about it.” Franklin said. “I realize being on a new team, not having the total belief of all the guys on the team, that was a big thing that I struggled with.”

Franklin had arrived in Toronto during the 2017 off-season after Argos general manager Jim Popp traded for his rights and then signed him to a two-year contract before he hit the open market.

After serving three years as a backup to Mike Reilly in Edmonton, he’d shown enough flashes of brilliance along the way to make him the most highly prized would-be free agent heading into the 2018 season.

The Toronto contract appeared to reflect the Argonauts vision of him as their starter in waiting. But that narrative, while widely accepted in the media and among fans, was stopped in its tracks late in the off-season when Trestman declared the No. 2 job up for grabs between Franklin and McLeod Bethel-Thompson, a journeyman holdover from the previous season.

It was a curious take since Franklin presumably would never have left the No. 2 job in Edmonton if he’d known he might be third on the depth chart in Toronto. Trestman replied to a further question about Franklin potentially earning playoff time over Ray during the 2018 season by stating the question was “disrespectful to Ricky Ray.”

Trestman may have been trying to scold a reporter or show his respect for Ray, but it sent a strange message to the team's newest quarterback.

“That was where I was like … what?” said Franklin. “Where did I ever say I was going to be a starter?”

Franklin’s relationship with Trestman didn’t get any better once training camp began. He felt limited in Trestman’s offence and some of his practice or in-game habits seemed to irk the coach. Franklin could also sense that his tendency to joke around with teammates and keep things loose – a sign to him that he is confident and relaxed – wasn't going over well.

“It was not the best,” Franklin said. “It was one of the most challenging relationships … It was different. It is really hard to explain but you could tell my type of personality didn’t click with his.

“Being the people-pleaser, it bothered me that our personalities didn’t mesh well. So I tried to do different things. I tried being a little bit different and it was just tough and it wasn’t for me. One of the things that helps me become a good player is I don’t let things become a big deal, and the bigger a deal it is, the more pressure it puts on anyone.”

Feeling as if he didn’t have Trestman’s confidence only made Franklin question himself more: Had he really won over his teammates? Could they tell that he and the coach weren’t on the same page? There were times he sensed tension with his teammates even when it wasn’t there.

“With [receiver] Armani Edwards … man I always thought even if I threw him a good ball he was mad at me, but that’s just how he plays,” Franklin said.

It took a good two months after last season for Franklin to see where he had failed himself. He started to understand that he needed to better express himself to his coaches and teammates and worry less about pleasing them. He needed to focus on himself rather than relying on them as his source of confidence.

He also had to let go of blaming Trestman, who had benched Franklin after he went 1-3 as the starter. He returned as starter later in the season after the Argos were eliminated from postseason contention. Trestman was fired the day Toronto’s season ended.

“It was a lot of blame game in my head,” Franklin said. “Coach Trestman did this, or I didn’t have this much time. It was always something else instead of just realizing it doesn’t matter what anyone else did. What matters is how I responded to it and I wasn’t responding well. Yes, I had some things said to me, but I chose to let them affect me the way that [it] did. So at the end of the day, the outcome of last year for my personal performance was all on me.”

There would be one more challenge to his confidence to come during the 2018 off-season, when in February the Argonauts went hard after Calgary quarterback Bo Levi Mitchell during the roughly four hours he was a free agent.

Mitchell returned to the Stampeders and Franklin is getting a second chance in Toronto, with a new head coach in Corey Chamblin and an entirely new offensive staff.

He knows he will have to impress them. But he now understands doing so means being focused on, and true to, himself – not anyone else.

“I’m trying to really, when it comes to football, really get away from that because it doesn’t matter what you’re doing, you’re never going to be able to please everyone,” he said. “It’s definitely a challenge because it’s a part of who you are at your core and you can’t just turn it off and on. But I want to get to that point where I can.”​