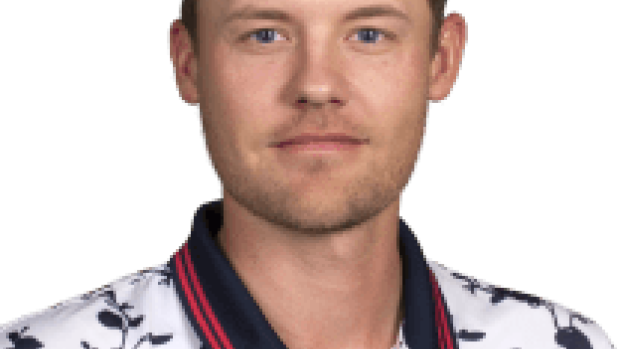 LITCHFIELD PARK, Arizona—Even as the wind picked up at The Wigwam’s Gold Course late in the first round of the Mackenzie Tour – PGA TOUR Canada’s Qualifying Tournament on Tuesday, Fredrik Lindblom played some of his best golf. He strung together four consecutive birdies, starting at No. 12, and that run of rolled-in putts led to a 6-under 66. That gave the native of Sweden a one-shot lead over Canada’s Wil Bateman and amateur Matt McCarty. Four players—Carson Roberts, Hayden Wood, Spencer Soosman and amateur Sean Yu—trail by two shots on a bunched leaderboard that has an additional 10 players tied for eighth, three strokes back.

Lindblom could only smile following his round, attributing local knowledge he picked up last week for his lead. A week ago, he played in an Outlaw Tour event on the Gold Course. Although Lindblom only tied for 30th, what he learned was invaluable.

“I didn’t make the putts last week, but it looks like they’re dropping this week,” Lindblom observed. “You have to be conservative with your approaches, especially when it’s windy here because the greens have a lot of run-off areas. I learned that last week and used that to my advantage today.

“A lot of things went right,” he continued. “I hit the driver really well. I drove it really well last week, and that continued today. And I rolled in some putts. I’ve been working really hard on my putting lately, and it paid off today.”

Lindblom finished with seven birdies and one bogey, opening with a birdie at the par-5 first hole and adding birdies at the par-5 fourth and the par-4 seventh. His lone blemish came at No. 6. He also birdied the 14th, giving him three birdies on the Gold Course’s four par-5s.

Like Lindblom, Bateman and McCarty also got off to quick starts. Bateman, an Edmonton native who lives in nearby Scottsdale, made birdies on three of his first four holes and was bogey-free on his opening nine, adding one more birdie, at No. 8. He turned at 4-under 67. Three birdies and two bogeys moved him to 67 as he seeks full Mackenzie Tour membership for the first time since 2016.

McCarty, a senior at Santa Clara University—extending his college career by one season because of the NCAA’s COVID-19 extra-year exemption—birdied his first three hole then cooled a bit, with eight consecutive pars after that. Following his only bogey of the day, at No. 12, McCarty finished with three pars and three birdies.

“It’s a long week, so it’s all about staying patient. I felt like I did a pretty good job of that today,” Bateman explained. “I’ve been playing really good golf the last six months. I think it’s all about handling my emotions this week because I know I’m playing super well, and I know there is a lot of opportunity out there.”

McCarty, like Bateman, made an unlikely birdie early in his day, draining a 27-footer at No. 2 during his three-in-a-row streak.

“It always helps to get off to a good start. I would rather be 3-under than even,” said McCarty, who also had a two-incher at No. 15 for birdie. “I was hitting my irons really well. I only had four or five putts where I was lagging it up there today. I just want to keep swinging like I’m swinging.”