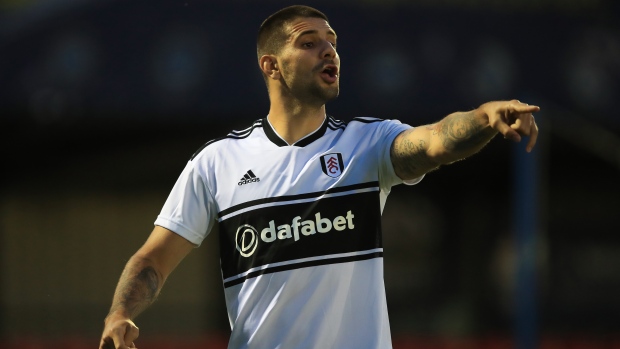 Fulham's quest for a Premier League return was made more difficult on Monday when the FA announced a three-game suspension for striker Aleksandar Mitrovic for violent conduct during Saturday's 3-0 loss to Championship leaders Leeds.

The Serbia international's elbow to the face to defender Ben White was missed by referee Tony Harrington, so the punishment comes retroactively.

Mitrovic, tied with Brentford's Ollie Watkins for most goals in the league this season with 23, will miss matches against Queens Park Rangers and Birmingham City, as well as a crucial clash with Nottingham Forest.

After spending a half-season at Craven Cottage on loan, Mitrovic signed for Fulham in a move worth up to £27 million from Newcastle in the summer of 2018.

Fulham currently sits fifth in the table, seven points behind West Brom for the final automatic promotion spot and seven points clear of Preston in a playoff position.

The Cottagers were relegated from the Premier League last year after a single season back in the top flight.