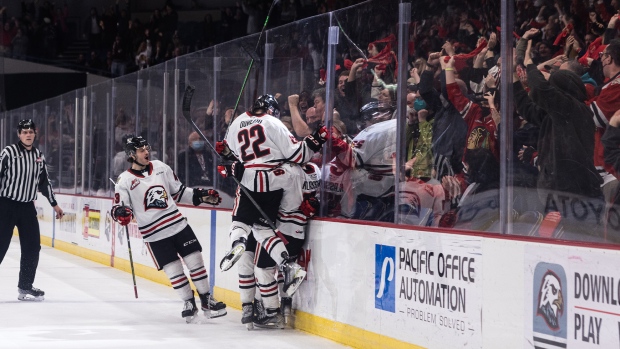 PORTLAND, Ore. — Gabe Klassen scored a short-handed goal with less than four minutes to play as the Portland Winterhawks edged the Seattle Thunderbirds 2-1 to take a 2-0 series lead in their second-round WHL playoff series.

Taylor Gauthier made 28 saves to pick up the win while Seattle's Thomas Milic stopped 29 shots.

The Thunderbirds opened scoring in the game with Lucas Ciona finding the back of Portland's net at the 9:05 mark of the first period.

Portland would respond midway through the second frame as Tyson Kozak scored to tie the game at 1-1.

In the third, at 16:22, Klassen would put the Winterhawks ahead for good 2-1 after Seattle turned the puck over leading to some good work from Jaydon Dureau, who charged the Thunderbirds net, missed his shot on goal, but picked up the rebound and found an open Klassen parked on the right side of the post for an easy tip-in.

The series will now shift to accesso ShoWare Center in Kent, Wash., for two games.