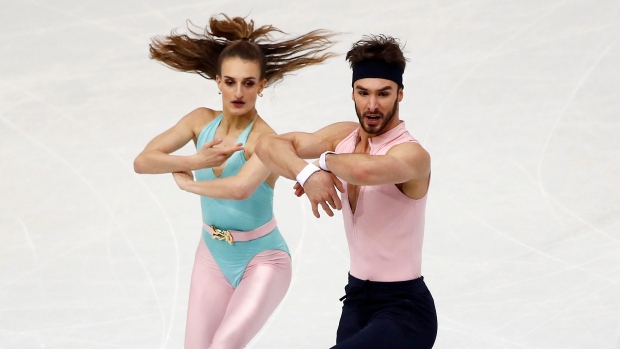 The 16-year-old Kostornaia, who's in her first senior season, was the only skater with a clean landing on a triple axel and scored 85.45 points to take the lead ahead of Saturday's free skate.

Zagitova scored 79.60 for second after a clean program, though she doesn't have the triple axel in her repertoire.

Anna Shcherbakova was third on 78.27.

Kostornaia and Shcherbakova have stepped up to the senior level this season, along with Alexandra Trusova, who placed fifth after a fall, finishing just behind fourth-placed Bradie Tennell of the United States.

All four of the Russians in the Grand Prix Finals share the same coach, Eteri Tutberidze.

Two-time world champions Sui and Han scored a total of 221.69 to win, keeping up a winning streak in competitions going back to the start of last season.

Peng and Jin were second on 204.27 after posting the best score in the free skate to recover from a disappointing fifth in Thursday's short program.

Anastasia Mishina and Alexander Galliamov placed third for Russia on 203.13.

Kirsten Moore-Towers of St. Catharines, Ont., and Michael Marinaro of Sarnia, Ont., were fourth in the free skate and fifith overall with a combined score of 197.99.

"We were happy to have a step up after a disappointing short program," Moore-Towers said. "Sometimes it doesn't seem fair when you do all the training and do good work at home. It happens to everybody and we kept a good attitude so we could turn our day around today."

Skating a program with a 1980s retro theme, the Olympic silver medallists scored 83.83 as they aim to remain unbeaten this season.

Last year's Grand Prix Finals winner, the U.S. pair of Madison Hubbell and Zachary Donohue, was second on 82.72 after their Marilyn Monroe-themed skate.

The other American pair of Madison Chock and Evan Bates were third with less than a one-point advantage over two Russian pairs.

Piper Gilles and Paul Poirier of Toronto were sixth with 79.53 points.

"It was the best skate we’ve had energy-wise but we're disappointed overall," Gilles said.

The women's and ice dance competitions both conclude on Saturday.

Note to readers: This is a corrected story. A previous version had the wrong score for Gilles and Poirier