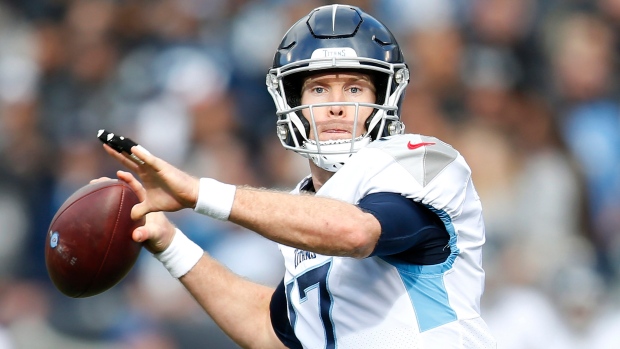 We are less than one month away from the January 4th kickoff of the 2019 NFL postseason.

If Week 14 is any indication, we could be in for a wild final few weeks of the regular season.

The top two seeds in both conferences have some quality teams right behind them in the race for positioning and first-round byes.

The Baltimore Ravens did what they had to do to beat the Buffalo Bills 24-17 and solidify their position as the top seed in the AFC.

It wasn’t nearly as dominant as some of their other wins, but the Ravens might not need to be at their best to sweep the New York Jets, Cleveland Browns and Pittsburgh Steelers to close out their season at 14-2.

Meanwhile, the Bills took a step back with their offence hitting a wall.

Buffalo is only one game up on the Steelers and Tennessee Titans in the AFC wild-card picture heading in to Week 15.

The Bills are also just one game back of the New England Patriots at the top of the AFC East.

What was the biggest story from that game?

Well, the Chiefs proved they could beat the Patriots in New England.

As for anything beyond that, it is what it is.

Here is what the AFC wild-card playoff picture would look like if the season ended now:

No. 6 Pittsburgh Steelers at No. 3 Kansas City Chiefs
No. 5 Buffalo Bills at No. 4 Houston Texans

While this scenario certainly offers some intrigue, it’s far from set thanks to one of the league’s forgotten contenders.

It’s important to remember the Titans (8-5) for several reasons.

The Titans have averaged a league-best 38.3 points per game over their last three victories.

Ryan Tannehill just led Tennessee to its best yardage output since the team arrived in Nashville in its 41-21 win over Oakland.

The Titans are now tied with Houston for the best record in the AFC South.

Tennessee is also tied with Pittsburgh for the final wild-card spot.

The Titans will close out their season with two games against the Texans and another against the New Orleans Saints.

Is it possible Tennessee wins those two matchups with Houston, steals an AFC South title and knocks the Texans out of the playoffs in the process?

The Titans have won each of their last three home games versus Houston.

If they extend that win streak on Sunday, the Texans could suddenly have their backs against the wall in the AFC playoff picture.

Meanwhile in the NFC, the San Francisco 49ers are still the team to beat.

Well, the 49ers are coming off a 48-46 win over the Saints that earned a Game of the Year nomination.

Jimmy Garoppolo went into the Mercedes-Benz Superdome and threw for 349 yards and four touchdowns.

Garoppolo’s 25 touchdowns are the fourth-most in the NFL this season.

I’m not sure why Garoppolo continues to be questioned by pundits, but he just proved he could go on the road, put his team on his back and beat one of the best teams in the NFL in their own building.

San Francisco has scored 36 points or more in three of its last four games.

The 49ers are up to 30.5 points per game this season – best in their conference.

San Francisco is once again the top seed in the NFC.

There is no doubt they are the team to beat on their side of the bracket.

Here is what the NFC wild-card playoff picture would look like if the season ended now:

No. 6 Minnesota Vikings at No. 3 New Orleans Saints
No. 5 Seattle Seahawks at No. 4 Dallas Cowboys

The NFC is absolutely loaded, with the Los Angeles Rams knocking on the door for a wild card following a 28-12 win over Seattle.

Los Angeles needs some help as they trail Minnesota by one game for that final NFC playoff spot.

The Rams also need to take care of their own business.

That brings us to one of the biggest stories of the season, which is the failures of the next opponent on LA’s schedule: The Cowboys.

The Cowboys still lead the NFC East with a 6-7 record despite being tied with the Philadelphia Eagles because they hold the tiebreaker after defeating the Eagles earlier this season.

However, the teams meet again Dec. 22 in Philadelphia which could decide who advances to the Jan. 4-5 wild-card round and who is done for the season.

The Cowboys could still very well end up missing the playoffs.

If they do go on to clinch the NFC East, Dallas will become the first team since 2011 to win its division despite suffering two separate three-game losing streaks.

The fact that they have a sub-.500 record despite Dak Prescott owning the NFL’s third-best QBR is absolutely brutal.

The Cowboys could be one of the most talented teams in the league, but they have a number of factors negating that, including first and foremost their coaching staff.

Dallas should benefit from the fifth-easiest remaining schedule with games against the Rams, Eagles and Washington Redskins.

Still, it will be interesting to see if the Cowboys have already reached rock bottom, or if the worst is yet to come.