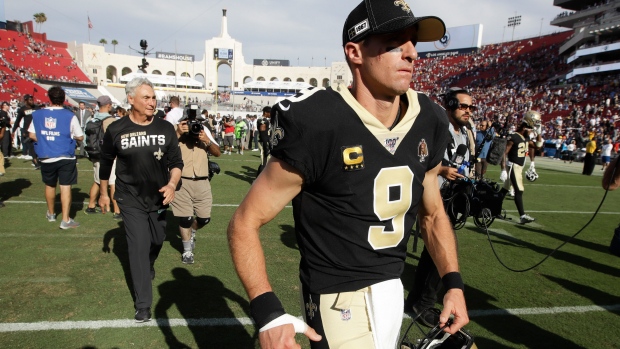 In just 25 days, one fifth of the starting quarterbacks in the National Football League have been either injured or replaced or have retired.

The six teams that made a change (by choice or otherwise) will pick up the pieces and push forward as best they can over the next 15 weeks.

For the rest of the league, the last 25 days can serve as a cautionary tale.

The quarterback carousel began on Aug. 24, with the shocking revelation that the 2018 NFL Comeback Player of the Year decided he would not come back.

Andrew Luck, who just last week turned 30, stood on the Indianapolis Colts sideline during a preseason game at Lucas Oil Stadium as news of his retirement spread across social media.

With just two weeks to go before the start of the regular season, the Colts lost their franchise quarterback.

To outsiders, it seemed almost incomprehensible.

But for as dominant as he was when he was healthy, injuries had taken their toll over the years.

Luck missed 26 games due to various injuries in his career, which included broken ribs, a lacerated kidney, at least one concussion and a shoulder injury that sidelined him for a full year in 2017.

After spending the off-season rehabbing both physically and mentally, Luck finally confronted one of the most difficult decisions he has ever had to make.

He didn’t want to walk away when he did.

But he knew that if he didn’t, he might never get another opportunity to decide for himself.

Just like that, Indianapolis was forced to turn to Jacoby Brissett as its starter.

Foles didn’t make it through a full quarter of regular season football in Jacksonville before he was sidelined indefinitely.

Only months after they signed Foles to a four-year, $88 million contract, the Jaguars were forced to turn to rookie sixth-round pick Gardner Minshew II as their starter.

A few days later on Sept. 12, something the football world had suspected for some time was confirmed: Carolina Panthers quarterback Cam Newton isn’t 100 per cent.

Trailing the Tampa Bay Buccaneers by six points at home with 1:28 left in the fourth quarter, the Panthers faced a crucial fourth-and-one situation at their opponent’s two-yard line.

Instead of running a QB sneak with Newton, an obvious play call in years past, Carolina lined up in the Wildcat formation with Newton as a decoy and handed the ball off to running back Christian McCaffrey.

McCaffrey tried to bounce it outside but was cut off by cornerback Vernon Hargreaves and pushed out of bounds short of the sticks.

Newton ended the game with two carries for zero yards.

When it was over, Newton shouldered the blame for the 20-14 loss. He also took accountability for the Panthers 0-2 start.

“Offensively, we didn’t hold up our end of the bargain. All fingers are just pointing back to me specifically on offence,” Newton told reporters after the game.

Taking a closer look at his performance, there are a number of indicators Newton isn’t fully healthy.

According to ESPN Stats & Information, Newton led the NFL in off-target throws with 15 in Week 2 alone.

That is the most off-target throws by any quarterback in a single game since Week 7 of last season.

Even worse, Newton didn’t complete a single pass under pressure.

Newton went 0-for-10 and was sacked three times when under duress in passing situations.

Admittedly, there aren’t many people outside of the Panthers locker room that know the full extent of the injuries the 2015 NFL MVP is dealing with right now.

What we do know is that Newton had surgery on his throwing shoulder for the second time in three years this past off-season.

We know that he didn’t throw for most of the off-season for the second time in three years.

We also know that those surgeries haven’t resulted in an improvement in Newton’s downfield passing ability over the past couple of seasons.

The numbers reflect that.

In losses to the Buccaneers and Los Angeles Rams, Newton went 4-of-15 with zero touchdowns on pass attempts that travelled 15 yards or more down the field.

Finally, we know that a mobile quarterback that earned the nickname “Superman” in part because he has never finished with fewer than 585 rushing yards in a 16-game season has minus-two rushing yards through two losses.

Newton’s status for Sunday’s game against the Arizona Cardinals is uncertain after he missed practice on Wednesday because he aggravated a foot injury suffered in the pre-season.

So where do the Panthers go from here?

It might not be long before we know the answer to that question as well.

Roethlisberger will miss the remainder of the season because of a right elbow injury that requires surgery.

Two years ago, the Steelers had the league leaders in passing yards per game, scrimmage yards per game and touchdowns catches on their roster.

Now, Roethlisberger is out, Le’Veon Bell is on the New York Jets and Antonio Brown plays for the rival New England Patriots.

At 0-2 and facing a difficult schedule the rest of the way, Pittsburgh turns to Mason Rudolph with the hope that the 2018 third-round pick can show them enough to believe he could be a franchise quarterback.

We know that Roethlisberger will miss the rest of the season.

We don’t know when, or if, he ever suits up for the Steelers again.

Meanwhile, Brees will miss at least the next six weeks with a thumb injury.

Brees has missed a grand total of three games since moving to New Orleans in 2006 and the Saints have lost all of them.

It will be up to Teddy Bridgewater to snap the skid now that he takes over as the starter.

It won’t be an easy assignment by any means.

The Saints travel to the West Coast to visit the 2-0 Seattle Seahawks in Week 3. After that, they will host the Dallas Cowboys, who should be 3-0 after they host the Miami Dolphins on Sunday afternoon.

It wouldn’t shock anybody if New Orleans is 2-2 at the quarter mark of its schedule.

It also wouldn’t be a surprise if the Saints started 1-3.

Either way, Bridgewater could be the first quarterback since 2005 to start more than one game in a season for New Orleans.

That is, if he can stay healthy.

Finally, on Tuesday, the New York Giants announced that Eli Manning has been benched in favour of rookie first-round pick Daniel Jones.

Jones becomes the sixth quarterback to take over a starting job and it’s only Week 3.

Considering the passer situations around the league, including New York in particular, it wouldn’t be a surprise if teams called the Giants to inquire about Manning’s availability.

The number of NFL starting quarterback changes over the last 25 days alone is alarming.

With 15 weeks to go, we are all but guaranteed to see more switches.

Jones, Bridgewater, Rudolph, Falk, Minshew and Brissett are all expected to start in Week 3.

Undrafted free agent Kyle Allen could also get the nod for Carolina if Newton isn’t ready to go.

As for the other 26 starting quarterbacks around the league, one goal heading into Week 3 is simple: Make sure that list doesn’t get any longer.