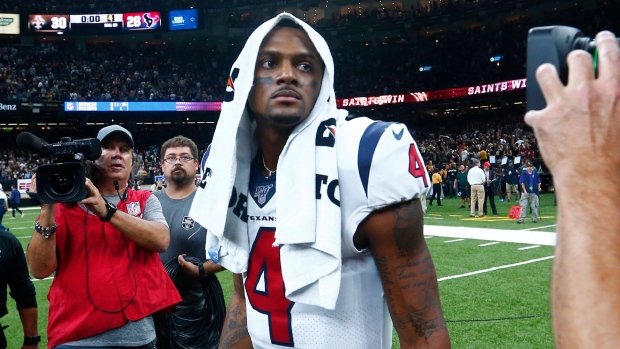 Six of those teams, including the Texans, won their divisions.

Over the last 16 years, 61.8 per cent of teams that reached the postseason were either 1-1 or 0-2 after their first two games.

Simply put, there is a reason you’ve heard experts talk about avoiding overreactions after Week 1.

Nearly half of the league’s teams opened the year with a loss.

For those 15 locker rooms, the focus now shifts to what it will take to bounce back in Week 2.

The transition will be easier for some than others.

In New York, the Jets are coming off a 17-16 loss to the division rival Buffalo Bills in which they blew a 16-point lead at home in Adam Gase’s debut as head coach.

In Detroit, the Lions began Year 2 of the Matt Patricia era with a 27-27 tie in Arizona.

Detroit didn’t lose only it might have felt that way after they blew an 18-point fourth-quarter lead to a Cardinals team it had absolutely dominated through three quarters.

And for as bad as those collapses were, the Jets and Lions at least made it look like they had a chance to win in Week 1 before things unraveled late.

The same can’t be said for the Pittsburgh Steelers or Cleveland Browns – both AFC North teams lost their openers by 30 points.

Then there’s the Miami Dolphins, who were absolutely destroyed by the Baltimore Ravens in a 59-10 rout.

However, unlike the Steelers and Browns, nobody is talking about Miami contending for a playoff spot this season.

Then there’s the Texans.

On the surface, a 30-28 loss to the New Orleans Saints Monday night might look like a bad break on the road in which a potentially superior opponent needed a 58-yard field goal as time expired to steal the win.

In a bubble, that’s what happened.

The problem with that narrative is that in order to believe it you need to ignore the fact that this isn’t the first time something like this has happened to the Texans under head coach Bill O’Brien.

On the road against the defending Super Bowl champion New England Patriots, Houston was down eight points midway through the third quarter. Then, rookie quarterback Deshaun Watson led a 13-0 run that gave the Texans a 33-28 lead with just over two minutes left in the fourth quarter.

It was only his third career NFL appearance, but Watson went head-to-head with Bill Belichick’s defence at Gillette Stadium and registered 342 total yards with a pair of touchdowns.

It was the kind of performance that signalled to the entire NFL that Houston’s rookie quarterback was special.

The only problem is that the Texans couldn’t hold on for the win.

Tom Brady led an eight-play, 75-yard drive that culminated with a 25-yard go-ahead score to Brandin Cooks with only 23 seconds left on the clock.

Five weeks later on Oct. 29 that same year, the Texans travelled to Seattle.

In one of league’s most hostile environments, Watson went off for 469 total yards and four scores, including a 72-yard go-ahead touchdown pass to DeAndre Hopkins with 4:49 left in regulation to give Houston a 38-34 lead.

The Seahawks got the ball back with 1:39 to go.

For Russell Wilson, that was more than enough time.

Wilson marched the Seahawks 80 yards in just a minute and 18 seconds, connecting with Jimmy Graham on an 18-yard go-ahead touchdown pass with 21 seconds left on the clock.

Days later, Watson would suffer a torn ACL in practice, which sidelined him for the remainder of his rookie season.

Houston, at 10-4, needed a win over the Philadelphia Eagles as they tried to hold off the Indianapolis Colts for top spot in the AFC South.

Once again, Watson did his part.

The second-year passer delivered with 388 total yards and four touchdowns, including an eight-play, 80-yard drive that ended with a 35-yard TD pass to Vyncint Smith to give the Texans a 30-29 lead with 2:04 left on the game clock.

Once again, it wasn’t enough.

Nick Foles marched Philadelphia 72 yards in just over two minutes to set up the game-winning field goal as time expired.

In all three of these specific instances, the Texans had a lead with less than two minutes to go in the fourth quarter and went on to lose.

In all three instances, Watson did all he could only to watch from the sideline as Houston lined up in prevent defence, only to be gashed for large chunks as their opponents moved the chains with ease to set up game-winning scores.

If you don’t learn from your mistake, or you don’t even realize you made a mistake, you’re doomed to repeat it.

So on Monday night when Watson moved the ball 75 yards in just 13 seconds capped off by a 37-yard touchdown pass to Kenny Stills that gave Houston a 28-27 lead following a made extra point, perhaps O’Brien and his staff didn’t even realize they were about to make another costly mistake.

TSN NFL analyst Davis Sanchez broke down what happened next on SportsCentre after the game.

Yes, it took a 58-yard field goal as time expired for New Orleans to steal the win.

But if you understand the big picture, then you get why Wil Lutz shouldn’t even have had the opportunity to kick that game-winning score in the first place.

The Texans' defensive backs on the near side of the field should have been pressed closer to the line of scrimmage rather than sitting back in soft coverage.

At the very least, that would have forced Drew Brees to either take a deep shot towards the end zone or hold the ball long enough for time to expire.

Instead, Houston's coaches gave him an out.

It was fascinating to watch Brees see the mistake in real time, check his wide receivers and then get the football to Ted Ginn Jr. at the 40-yard line in less than six seconds of game time.

Once again, the Texans were burned by their prevent defence.

As was the case in each of those previous losses, Houston would have had a much better chance to end the game if they didn't try to play it safe.

So what’s next for each of these teams?

Baker Mayfield and the Browns will travel to face Sam Darnold and the Jets in a battle of the top two quarterbacks from the 2018 NFL Draft on Monday Night Football.

That means at least one of those teams is guaranteed to remain winless heading into Week 3.

Meanwhile, the Lions will host the Los Angeles Chargers – another team that blew a double-digit lead in Week 1 but ended up rallying for a 30-24 win over the Indianapolis Colts in overtime.

Pittsburgh will host the Seahawks, which like the Chargers will be another team travelling for a 1 p.m. ET start Sunday.

As for Houston, a Week 2 matchup with AFC South rival Jacksonville Jaguars looks a little more appealing after Foles suffered a broken left clavicle in his debut and opened the door for rookie sixth-round pick Gardner Minshew to take over the starting job.

A year ago, Houston became the first team in NFL history to follow up a 0-3 start with nine consecutive wins.

The Texans were also the first team in 36 years to win their division following a 0-3 start.

Nobody believes Houston can’t overcome a Week 1 loss to the Saints.

But again, if you don’t learn from your mistakes, or you don’t even realize the mistakes in the first place, you’re doomed to repeat them.

Texans fans won’t forget those heartbreaking losses to the Patriots and Seahawks in 2017, the Eagles in Week 16 last season and the Saints on Monday night.

At this point, they can only hope that O’Brien and his staff will learn from them.