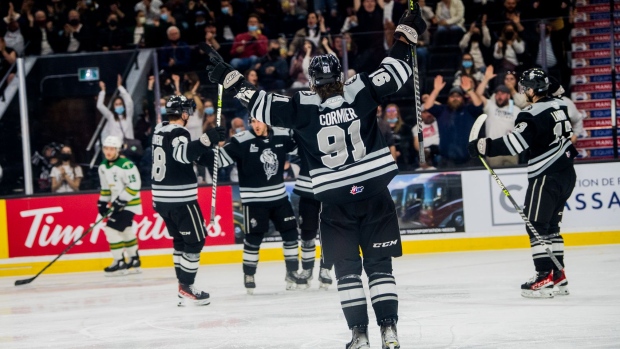 Olympiques goalie Rémi Poirier made 17 saves as they outshot the Foreurs 38-18.

The offensive prowess Gatineau showed was a far cry from just the one goal it put up in Game 1's loss.

Game 3 between the two clubs in their best-of-five series goes Monday, with the series shifting to Val-d'Or.

In other QMJHL playoff action Friday, the Saint John Sea Dogs doubled up on the Rimouski Oceanic 4-2 to tie their series 1-1, the Halifax Mooseheads took a 2-0 lead with a 6-5 win over the Acadie-Bathurst Titan, the Charlottetown Islanders went up 2-0 with a 4-2 victory over the Moncton Wildcats, the Shawinigan Cataractes also went up 2-0 after edging the Rouyn-Noranda Huskies 2-1, the Sherbrooke Phoenix dumped the Baie-Comeau Drakkar 4-1 to take a commanding 2-0 lead, and the Blainville-Boisbriand Armade tied their series up with the Drummondville Voltigeurs with a 4-1 romp.