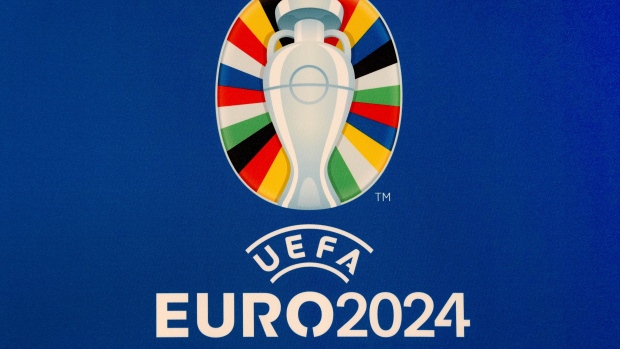 BERLIN (AP) — Germany on Tuesday unveiled the logo for soccer’s 2024 European Championship during a ceremony with a light show in the stadium that will hold the final.

Some guests and media were invited to Berlin’s Olympiastadion for the UEFA launch, though no fans were present on a damp evening in the German capital.

The logo features an outline of the Henri Delaunay Cup — the bulbous tournament trophy — set on a colored oval outline that resembles the Olympiastadion’s roof. It features colors from the flags of UEFA’s 55 member nations, set in 24 slices around the trophy to represent the 24 teams that will ultimately qualify for the tournament in Germany.

Organizers said the brand will promote a tournament where diversity is celebrated, and everyone should feel welcome. The tournament’s slogan “United by Football. Vereint im Herzen Europas” — or “United at the Heart of Europe” — is meant to convey a message of togetherness and inclusion.

Logos for each of the 10 host cities — Berlin, Cologne, Dortmund, Düsseldorf, Frankfurt, Gelsenkirchen, Hamburg, Leipzig, Munich and Stuttgart — were also presented with each featuring a famous local landmark. Berlin’s, for example, features the Brandenburg Gate.

“From now on, the tournament has a brand identity which reflects the ambition we have together with the host association and host cities,” UEFA president Aleksander Čeferin said.

The tournament is due to be played in June and July 2024 with the match schedule to be confirmed next year.

Germany hosted the World Cup in 2006, with the final held in the refurbished Olympiasstadion. The stadium was originally built for the 1936 Olympic Games hosted by Nazi Germany.

West Germany also hosted the World Cup in 1974 and the European Championship in 1988.