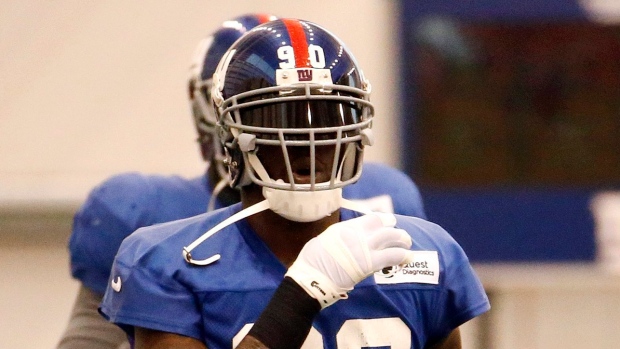 All he has to do is convince the Giants' medical staff to let him play with the right hand that he injured in a fireworks accident on July 4.

Pierre-Paul picked up his workload at practice Wednesday and seemed confident he would be able to return to his Pro Bowl form. He lost his index finger in the accident and had a couple of other fingers damaged.

A confident Pierre-Paul said he has been able to shed blockers and grab opponents since rejoining the team last week, and practicing for the first time since being injured. He expects opponents to test him and he vows to be ready.

"Yeah, I want to play, yeah," Pierre-Paul said. "But it's up to the medical staff; like I said, they're taking me slowly."

Coach Tom Coughlin insisted that the team will not rush Pierre-Paul back before he is ready. He was adamant that giving up 52 points against New Orleans last weekend also would not influence the decision.

Pierre-Paul is eager to play.

"I think I'm OK," the 26-year-old, two-time, Pro Bowler said. "You never know until you're out there, that's why there's practice. I've been doing good in practice.

"Coming off any injury, you've just got to go out there and have that confidence," he said.

Pierre-Paul added that he feels also confident in using his hand against opponents.

Pierre-Paul will have to make adjustments. He is right-handed. He will now put his left hand down. He has been wearing a glove on his right hand, but he said there is nothing special it, other than it covers his hand.

"I think I'm doing a great job at it because I've been able to grab and shed tackles," he said. "It's just a big adjustment but I'm OK, I'm doing pretty good. Skillset hasn't lost it, I haven't lost it. I'm out there doing what I can. Hopefully I'll be out there Sunday."

The Giants' pass rush has suffered with their best defensive player sidelined. He had a team-high 12 1/2 sacks last season. The Giants have nine in eight games this season.

Pierre-Paul understands there will be expectations that his return will fix everything.

"I know for a fact that I'm still the same JPP — getting to the ball, screen pass, running and chasing down, getting to the quarterback, playing the run," Pierre-Paul said. "It's just that confidence I've got to get back. Hey, my hand is OK. You've just got to do what you've got to do.

Pierre-Paul might have some fan support in Tampa. He played in college at South Florida.

"He's a great player," Smith said. "Each week if a guy is practicing at all and there's a chance of them playing, we have to prepare that way. As far as preparation, he's one of the best defensive players in the league when he's playing, so we'll have a plan for it and just do the best we can."

There is no doubt the Bucs will test him.

NOTES: CB Prince Amukamara practiced for the first time since hurting a pectoral on Oct. 11. LBs Jon Beason, J.T. Thomas, G Geoff Schwartz, WR Rueben Randle, TE Larry Donnell, S Craig Dahl all did not practice because of injuries. ...There is still no word on when WR Victor Cruz (calf) will practice. He has not played this season.