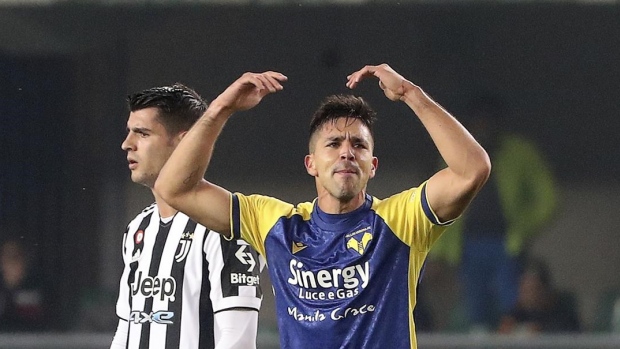 ROME (AP) — Giovanni Simeone is finally starting to emerge from his father's shadow in Serie A.

The younger Simeone is having quite a week. He also scored all four goals in Verona’s 4-1 win over Lazio — one of his father's former teams — last Sunday.

“Dad did his thing and I’m doing mine,” the 26-year-old Simeone said. “Every day, every year, I get more mature.

“I’ve found the right balance and everything is working well right now.”

Simeone now has eight goals in 10 matches this season, leaving him behind only Ciro Immobile of Lazio (nine goals) on the Italian league's scoring chart. He's also scored twice against Juventus with Genoa and Cagliari.

Juventus, meanwhile, now has as many losses (four) as it has wins. The Bianconeri, which are struggling to regroup after Cristiano Ronaldo's departure to Manchester United, also lost to Sassuolo on Wednesday after conceding a late winner.

The result left Juventus in ninth place, level on points with Verona, and 13 points behind leaders Napoli and AC Milan, which both play on Sunday.

“Wearing the Juventus jersey does not guarantee us that we’ll beat midtable teams,” Juventus coach Massimiliano Allegri said. “Our mistake was assuming we were better than Verona, and right now we are not. We must be realistic.”

Simeone’s first goal came 11 minutes in, when he redirected in a rebound of a shot from Antonin Barak.

Three minutes later, Simeone curled in a long shot from beyond the 18-yard box into the far corner.

Weston McKennie pulled one back for Juventus 10 minutes from time for his second goal in as many matches. The United States international was left unmarked in the center of the area to rifle a shot into the roof of the net.

Nikola Kalinic nearly added another for Verona in the final minutes, then Verona goalkeeper Lorenzo Montipo made a spectacular leaping save to swipe away an excellent curled effort from Paulo Dybala.

Simeone had been inconsistent in spells at Genoa, Fiorentina and Cagliari. Verona acquired him on loan in August with an option to make the deal permanent.

“He’s a great striker,” Verona coach Igor Tudor said. “As well as being a fine striker, he’s intelligent, humble, eager to learn and I think both he and (fellow Verona forward) Gianluca Caprari are suited to my style of football.”

Tudor, who was an assistant under Andrea Pirlo at Juventus last season, was hired by Verona in September after three straight losses under Eusebio Di Francesco.

Since Tudor took over, only unbeaten Napoli and Milan have earned more points than Verona.

Marten De Roon scored an injury-time equalizer for Atalanta in a 2-2 draw with visiting Lazio.

The result meant that Atalanta remained in fifth place and Lazio stayed sixth.

Lazio goalkeeper Pepe Reina appeared to have been hit with an object thrown from the stands during the final minutes but continued playing.

After Pedro gave Lazio an early advantage, Duvan Zapata scored for Atalanta just before the break.

Then Immobile put Lazio ahead in the 74th to match Silvio Piola as the Roman club’s all-time leading scorer with his 159th goal across all competitions.

De Roon then used one touch to score with an angled shot for his first league goal in 399 days.