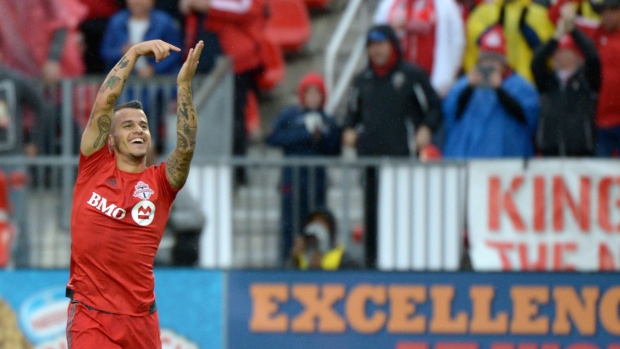 TORONTO - After 287 career MLS games, Toronto FC will have to wait a little longer to secure its first-ever playoff berth.

The post-season drought seemed destined to end Saturday when Sebastian Giovinco, channelling the Blue Jays with his goal celebration, and Jozy Altidore scored to help Toronto FC to a 3-1 win over the Philadelphia Union.

In the wake of the victory, the only thing needed to secure the playoff berth for Toronto (14-13-4) was an Orlando loss or tie against visiting Montreal in a later start.

Orlando refused to roll over, however, rallying to beat Montreal 2-1 on an 80th-minute goal by Seb Hines that kept Toronto waiting. Canadian Cyle Larin scored Orlando's other goal.

Toronto has a bye this week and doesn't play until Oct. 14 when it hosts the New York Red Bulls. A tie would get Toronto into the playoffs, as would an Orlando loss or tie to New York City FC on Oct. 16.

Saturday's loss eliminated Philadelphia (9-16-7), which started the day in ninth place in the East, from playoff contention.

The top six teams in each of the two conferences make the playoffs. Toronto stands fifth in the East with three games remaining.

Toronto-born defender Steven Vitoria scored for Philadelphia in the 66th minute, making for a more competitive finale. Union goalie Andre Blake made several fine stops as Toronto controlled play for much of the game.

A stoppage-time Philadelphia own goal made it 3-1 when Richie Marquez put a Jonathan Osorio cross into his own net.

Toronto entered the league in 2007, going through eight managers before settling on Greg Vanney late last season as the man to lead them to the promised land of the post-season.

Toronto ran its winning streak to three before an announced crowd of 18,332 on a cold, windy and occasionally wet day at BMO Field. Philadelphia saw its unbeaten road string snapped at four games (2-0-2).

It was one-way traffic for the first two-thirds of the game against a Philadelphia side coming off a crushing 7-6 penalty shootout loss at home to Sporting Kansas City in Wednesday's U.S. Open Cup final.

"First of all congrats to Toronto," Philadelphia coach Jim Curtin said. "They were the better team on the day. It was always going to be tough coming off the heartbreaking Open Cup loss, kind of rallying the troops. After a 120 minutes I thought we put up a decent fight."

Giovinco, on his third free kick of the first half, converted in the 28th minute from the edge of the penalty box when his shot deflected off Raymon Gaddis in the wall and looped high into the far corner of the goal. Giovinco, who was called into the Italian squad earlier in the day, celebrated his 21st goal of the season with the Blue Jays "Stir the Pot" celebration.

The Italian almost added another off a free kick in the 43rd minute, forcing a lunging save from Blake.

Toronto outshot Philadelphia 11-0 (2-0 in shots on target) in the first half. It took the Union 52 minutes to test Toronto 'keeper Chris Konopka.

Blake, meanwhile, had to be sharp again in the 49th minute to push away an Altidore shot. But Altidore beat him in the 63rd, fighting off a defender to tap the ball in for his 12th of the season after a fine cross from Marky Delgado. Brazil's Jackson triggered the play by stealing the ball from a Union player.

Vitoria, who has spent most of his career in Portugal and played for Portugal's under-19 and under-20 teams, got one back three minutes later heading in a Cristian Maidana free kick as Toronto's defence wobbled. It was Vitoria's first goal in MLS.

Toronto outshot Philadelphia 21-5 (4-3 in shots on target) over the game and had 12 corners to the Union's one.

"I thought it was a big moment for the team, as they were coming into this game, they knew the importance of the game and I thought we had one of our most solid beginning-to-end performances where I thought everybody who came on the field or was part of the game, had a good solid game," said Vanney.

Curtin made five changes to his starting lineup, with captain Maurice Edu (knee) among the changes. Andrew Wenger, a forward, served as makeshift left back.

Vanney made one change, replacing Delgado at fullback with Jackson. That ended Delgado's streak of 17 straight starts, although he came on to start the second half.

Toronto has won all three meetings with Philadelphia this season, with Giovinco scoring three of TFC's five goals.