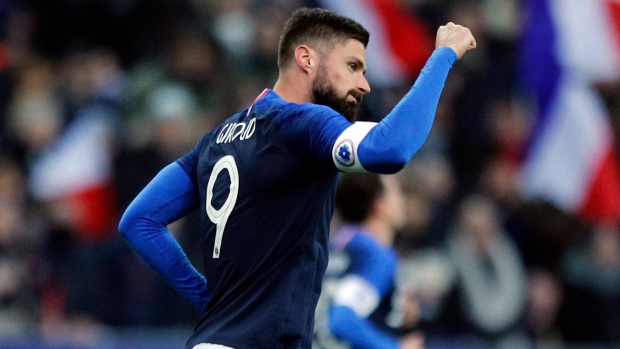 PARIS — Olivier Giroud scored the winning goal from the penalty spot as a lacklustre France rallied to beat Moldova 2-1 on Thursday to move ahead of Turkey in their European Championship qualifying group.

Giroud confidently smacked the spot kick into the left corner in the 79th minute after left back Lucas Digne was tripped running onto a return pass from Kylian Mbappé. It moved Giroud onto 39 international goals and just two behind Michel Platini in France’s all-time scorers’ list, which Thierry Henry tops with 51.

France had already qualified for Euro 2020 earlier Thursday because Iceland drew 0-0 at Turkey, guaranteeing France and Turkey the top two positons in Group H. France is two points ahead of Turkey and completes its qualifying away to Albania on Sunday.

But a sloppy and patchy performance, punctuated by missed passes and clumsy errors, annoyed France coach Didier Deschamps, who said he could have taken any of “five or six” players off at halftime.

“Our first half was not good enough, I’m not satisfied with how we attacked. There wasn’t enough movement, it was too static,” said Deschamps, adding that he had stern words with his players during the break. “Yes, sometimes I can be hard on them and even very hard. There’s so much potential in this side that when I don’t see what I want to see, I say so.”

Moldova defended deep with numbers and occasionally broke quickly up field, a simple but effective tactic which frustrated France. Giroud flashed a header just wide in the 30th minute and Mbappé had a low shot easily saved shortly after.

France’s 35th-minute equalizer perhaps should not have stood.

From Antoine Griezmann’s free kick, Giroud appeared to try to flick the ball with his hand and also backed into goalkeeper Alexei Koselev, who fell down and was then unable to keep out centre half Raphaël Varane’s close-range header.

Mbappé and Giroud squandered chances early in the second half.

Giroud, who has hardly played at all for Chelsea this season under coach Frank Lampard, lacked some sharpness and failed to latch onto a through ball from Mbappé with 20 minutes left.

But with the crowd chanting his name over and over, he slammed home the penalty and then proudly puffed out his chest.

“He is useful and indispensable, also very efficient,” Deschamps said. “He enables the players around him to have scoring chances as well. That also explains why he’s still playing for us, despite not playing for Chelsea.”