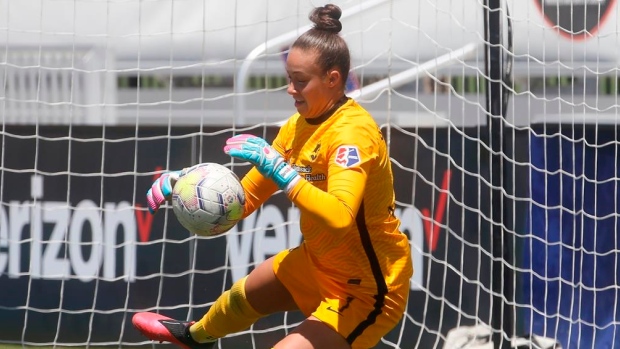 Sheridan was a finalist for the NWSL goalkeeper of the year award this season, for the second time in her career.

The 26-year-old from Pickering, Ont., spent five seasons with Gotham, previously known as Sky Blue FC, which drafted her 23rd overall in 2017 out of Clemson University.

"One of the priorities for Gotham FC this off-season was to secure protection in the upcoming expansion draft, which meant some difficult decisions had to be made," interim Gotham GM Yael Averbuch West said in a statement. "Kailen had expressed interest in pursuing other professional opportunities and we were fortunate to find a good trade partner in San Diego to accommodate her wishes.

"She has been a major part of this club for the past five years and we thank her for the impact she's made. Kailen is a phenomenal goalkeeper and we know she'll go on to do great things in the future. She'll certainly be missed."

Sheridan made 91 appearances for Gotham across all competitions and was voted the 2020 Challenge Cup Golden Glove winner. She finished the 2021 regular season with an 84.4 save percentage and six shutouts, earning a place on the 2021 NWSL Best XI.

Part of Canada's gold medal team at the Tokyo Olympics, Sheridan has won 16 caps for Canada with eight clean sheets.

San Diego is slated to start play in 2022 along with Angel City FC of Los Angeles. An expansion draft is scheduled for Dec. 16.

San Diego previously acquired the rights to Mexican international Katie Johnson and fellow forwards Makenzy Doniak and Kelsey Turnbow in a trade with the Chicago Red Stars, defender Tegan McGrady from the Washington Spirit, England international forward Jodie Taylor from the Orlando Pride and U.S. international defender Abby Dahlkemper from the Houston Dash via a three-way trade that included the North Carolina Courage.

This report by The Canadian Press was first published Dec. 4, 2021