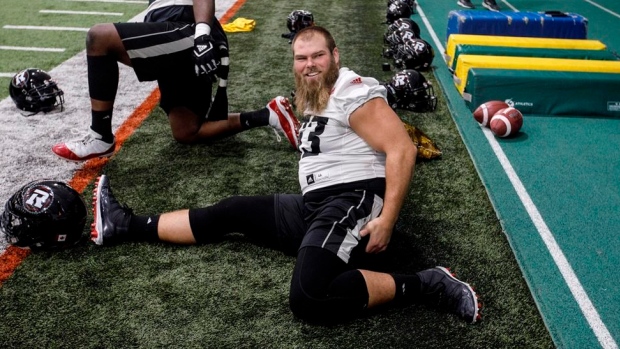 EDMONTON — Jon Gott still gets jacked up to face the Calgary Stampeders even after all these years.

The colourful offensive lineman began his CFL career with Calgary in 2009 before being dealt to the expansion Ottawa Redblacks prior to their inaugural season in 2014. On Sunday, Ottawa will make its third Grey Cup appearance in four years and face the Stampeders for the second time in three seasons for the league championship.

And while he doesn't yet know if he'll be on the field for the championship game, time has done little to quell the excitement the Edmonton native feels whenever his team faces the Stampeders.

"It's your former team," Gott said Thursday during the Redblacks' media day session. "You always get that extra motivation to beat them.

"It's fun to play against them. It was tough to leave Calgary because I was there for five years and I'm from Alberta, but it was a new opportunity and I jumped on the chance and it's been great."

The six-foot-three, 297-pound Gott, who resembles ZZ Top frontman Billy Gibbons with his long, bushy beard, simply loves playing football. And the sporting world was witness to that on Nov. 2 during Ottawa's 24-9 regular-season finale home win over the Toronto Argonauts.

Following Ottawa's final TD of the game, Gott, 33, took the league's liberal touchdown celebration policy to a new level. He ran into the end-zone stands, grabbed a beer from his girlfriend and started chugging it through his facemask.

When he was finished, Gott crushed the can against his helmet. Gott's celebration was widely circulated all over social media in Canada and the U.S.

ESPN's tweet of the video with the caption: "They celebrate TDs a little differently in the Canadian Football League," had over two million views and been retweeted more than 18,000 times by the following day.

Gott reiterated Thursday he'd thought about chugging a beer for a couple of years but patiently waited for the right time. And with help from his girlfriend, Gott said the regular-season finale presented the best opportunity.

"I had my girlfriend in the right spot, she had the beer and it just worked out perfectly," he said. "It was a fun time."

Gott, who played collegiately at Boise State, has enjoyed a solid run with Ottawa. Twice he's been named a CFL all-star (2015-16) and was the East Division's top lineman in 2016.

And then there was the Redblacks' stunning 39-33 overtime win over Calgary in the 2016 Grey Cup. A heady rise for a franchise that posted a 2-16 record in 2014, its first season of operation.

"It's pretty unbelievable when you think about it," Gott said. "They have the right people in the right places and we just built on it.

"Now we have a foundation, a core, of guys that know what to do and they lead the team . . . it's pretty impressive what we've done. (In 2016), no one gave us a chance and they came back and fought back but in the end we pulled it out and it was great."

Gott said he didn't head to Ottawa with his head hung low because quarterback Henry Burris was also among the veterans to join the Redblacks. Burris and Gott were teammates in Calgary and it was Burris who, despite suffering a knee injury during the pre-game warmup, who led the Redblacks to their stunning Grey Cup win over the Stamps.

"And the fans are awesome in Ottawa. That first game was unbelievable when we got that win (18-17 over Toronto) and they've been great ever since."

For the second time in three years, Gott has an opportunity to end a season celebrating a championship win over his former team. But there's some question whether Gott will play Sunday because he didn't dress for Ottawa's 46-27 East Division final win over the Hamilton Tiger-Cats.

And the Redblacks haven't yet released their Grey Cup roster.

"It would be great if I was playing," Gott said. "I've been in the league 10 years now and to not play this game would be pretty tough.

"But I'll do what I can, I'll help the guys out on the sidelines."

Gott is scheduled to become a free agent in February and isn't ready to call it quits just yet.

"No because I still feel I can play at the high level that I expect myself to play at," he said. "I'll go to free agency and see what happens.

"The CFL has been awesome to me. I've been playing 10 years, not many guys can say that. It's great, I love playing football."