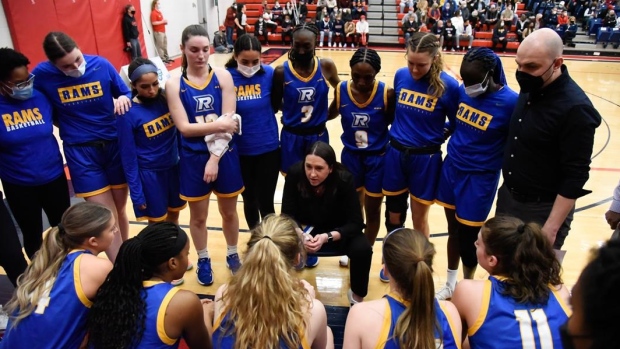 TORONTO — Two years into the global pandemic that erased an entire university basketball season and saw their gym locked up for months at a time, the Ryerson Rams' mantra is to "play with gratitude and joy."

"We have players that stuck it out to have the opportunity to have this season, and from Day 1, (gratitude and joy) has been a theme," said Carly Clarke, head coach of Ryerson's women's team. "And we do have a really special group of people that are connected for a multitude of reasons and are committed to the same goal and process. So, they've been a pretty incredible group of people to work with."

With an incredible record as well. For the first time in the history of the women's team, the Rams are the No. 1 seed for this weekend's U Sports Canadian university championships, boasting an OUA record of 17-0 that included a thrilling 22-point, fourth-quarter comeback in the OUA conference final last weekend.

"Oh, my goodness. I have not watched it back yet. But I'm reliving it in my mind a lot," Clarke laughed, about the nailbiting final.

Ryerson rallied to beat Brock 72-70 in overtime of the Critelli Cup in St. Catharines, Ont.

"So many of them had been through much through so much to get to that point and they wanted it so badly that I could see the nerves in our eyes for more than the first half," Clarke said. "And we couldn't settle in . . . we shot it incredibly poorly, which is out of character and got ourselves down by 22, with seven minutes to go."

Clarke said they made a small adjustment to their defensive pressure.

"All of a sudden we went on a quick run, cut it to 12, and then (the Badgers) were using their timeouts, they kept turning it over. So, in my mind it went from 'Hey, we have a shot,' to 'We're going to do this,; and you could see the players believing in that too.

"And they had amazing composure and then discipline through it all and obviously pushed through a ton to get to that point."

The No. 1 seeding is only the third in Ryerson history among all teams. Men's basketball was the top seed in 2017 and '18.

The Rams were upset by UPEI in the quarterfinals of the 2020 Final 8 tournament, one of the last events held in Canada before the COVID-19 pandemic shut down sports around the world.

Ontario faced among the tightest restrictions in the country, and it wasn't until August that the Rams were permitted back in the gym, initially with no contact permitted. Another wave shut them down from November 2020 to July of 2021. And then the Omicron variant shut down OUA sport for six weeks again this winter.

"It was a long haul," Clarke said, sounding weary. "I still can't believe how long it was."

As the wins have piled up for the Rams this season, Clarke, who's also an assistant with Canada's national women's team, has tried not to look at them as a whole. Their sparkling record is something she'll savour in a few weeks.

"It's been great. But truly, I've just been so focused on the next one," she said. "So my thought process personally has not been like, 'Oh, now we're whatever-and-0, now whatever-and-0.' It's just been like: we won the last one, and now we're playing whoever and we're trying to win this one.

"And it's just been trying not to get caught up in the record."

Rounding out the Final 8 seeding is No. 2 Saskatchewan Huskies, who won the 2020 national title and are this year's Canada West champions. The Winnipeg Wesmen (Canada West finalists) are No. 3, followed by No. 4 Badgers (OUA finalists), No. 5 Acadia Axewomen (AUS champions), No. 6 Laval Rouge et Or (RSEQ champions), No. 7 Queen’s Gaels (hosts) and No. 8 UPEI Panthers (wildcard).

The Rams' game versus UPEI tips off Thursday's action at Queen's University, followed by Brock versus Acadia, Winnipeg versus Laval and finally the host Gaels versus Saskatchewan.

The semifinals are Saturday and the gold and bronze-medal games are Sunday.

This report by The Canadian Press was first published March 29, 2022.