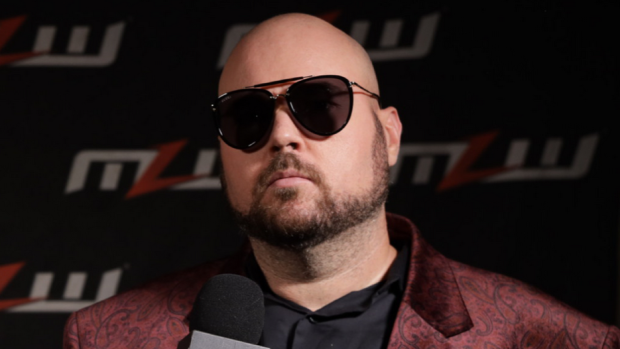 When Major League Wrestling returns with its flagship Fusion show on Wednesday night after an eight-month hiatus due to the ongoing coronavirus (COVID-19) pandemic, there will be more than a little Canadian flavour to the proceedings.

Not only will Calgary-born Davey Boy Smith Jr. of the legendary Hart family be wrestling for the MLW world heavyweight championship in the main event and Toronto's Alicia Atout serving as backstage interviewer, but a member of a different dynastic Canadian family will also take centre stage. Jared St. Laurent, great-grandson of Prime Minister Louis St. Laurent, begins his new role as host of the show and fight analyst.

The 12th Prime Minister of Canada, St. Laurent was in office for nearly nine years from 1949 to 1957, leading the Liberals to a pair of majority governments. St. Laurent was instrumental in the formation of NATO and Canada's decision to join it. While politics are clearly in the younger St. Laurent's blood, he chose to strike out on a different path in his professional life.

“For me as a kid, growing up and studying all of the great things my great-grandfather did and trying to make the family proud, I went in a little bit of a different direction,” St. Laurent told TSN.ca. “I’m from a political family, my grandfather [Jean-Paul St. Laurent] was in Parliament and my father is a Republican strategist down here and I ended up in wrestling, but to get to host a national TV show on beIN Sports, in the U.S. and Canada, I’m really excited for my family up in Canada to get to see me.”

While St. Laurent, who also serves as chief operating officer for MLW, cites the likes of Bobby “The Brain” Heenan and Jesse “The Body” Ventura as inspirations for his new role, he says his approach to commentary will be influenced by sports outside of wrestling, as well.

“My father, of course, is from Montreal and I grew up watching Montreal Canadiens games with him, but a lot of my approach to commentary comes from watching other sports,” St. Laurent said. “I’m a big boxing fan, I’m a big basketball fan. I was born in Miami where we now have a Major League Soccer team, so I’m watching a little bit of everything and I try to bring that approach to the broadcast booth – treating wrestling as a sport. It’s actually the original sport if you go back to the early days of the human species. Wrestling was our first sport, so I think it’s important to treat as a sport.”

St. Laurent will work alongside Rich Bocchini, MLW’s lead announcer, and says he won’t be afraid to give underhanded actions their due on commentary.

“I think it’s okay for me to play devil’s advocate and try to argue in favour, maybe, of some of the tactics that fans at home don’t appreciate,” St. Laurent said. “I do think it’s important that if you have some wrestlers who look for shortcuts or loopholes and look to break the rules, there should be somebody who can justify their point of view or at least present where they’re coming from.”

For MLW, Wednesday’s return marks the second time the company has come back from a long layoff.

Started by Court Bauer in 2002 and embracing the hardcore style of the day, MLW ran for three years and featured the likes of Raven, CM Punk and Steve Corino in prominent roles. After 13 years of dormancy, MLW returned in 2017 with a mix of established stars like L.A. Park and Low Ki, former MMA fighters like "Filthy" Tom Lawlor and "King Mo" Lawal, and up-and-coming talents such as Marshall and Ross Von Erich, the next generation of the iconic Von Erich family.

With the pandemic forcing the company to cease operations and regroup, St. Laurent says the stoppage came at an inopportune time for MLW’s momentum, but feels like the company is in a strong position moving forward.

“We were in a situation where, before the pandemic, we were down in Mexico with a sold-out arena and 5,000 fans, the biggest show we’d ever done,” St. Laurent said. “And you get back to the United States and then a couple of days later, everything starts shutting down. It certainly wasn’t the way 2020 was originally planned, but we took our time coming back and wanted to put the health and safety of the athletes first. We said from the beginning that when we come back, we want to do it right and we want to do it safely. I know we came back a little slower than some of the other companies, but I’m very happy with how everything has turned out with the restart and the fans all seem excited.”

Now in a wrestling landscape full of competing promotions, St. Laurent believes that MLW stands out thanks to its presentation of wrestling as a traditional sport.

“It’s a great time for a wrestling fan,” St. Laurent said. “There’s a lot of variety. Whatever it is that you look for in your pro wrestling, I’m sure that there’s someone out there that’s offering what you want. For us here at MLW, the mission statement is clear – we are a sports league. We are presenting big fights. This is not a Broadway show. I’m a big fight fan. I always have been, as a kid renting old UFC tapes back in ’93, ’94 and growing up watching boxing with my father, who’s a huge boxing fan. If you’re a sports fan who also likes wrestling, we’re the show for you… I think we are the league for fans who take this seriously.”

St. Laurent says that mindset continues into the MLW locker room with its roster of athletes.

“If you look at a lot of the wrestlers that we’ve had over the last few years – take a guy like a Low Ki, sometimes they have a reputation for having been thought of as difficult or hardheaded in other leagues and the truth is that they just take this sport very seriously and if you don’t, you’re going to butt heads,” St. Laurent said. “I feel like with our locker room and our leadership behind the scenes, what unifies all of us is the philosophy of how seriously we take pro wrestling. I think it really shows on our programs the difference in the approach.”

At the centre of MLW is its heavyweight champion, "The Samoan Werewolf" Jacob Fatu, who will take on Smith Jr. in Wednesday night’s main event. Fatu is a member of the legendary Anoa’i family. St. Laurent thinks viewers who are unfamiliar with Fatu will be in awe of what he brings to the ring.

“For maybe fans who are kind of new to the MLW product and are seeing Jacob Fatu for the first time, he’s just going to blow their minds,” St. Laurent said. “For a guy his size, 300 pounds, the way he can fly around the ring with the best moonsault in the sport is just crazy. He’s just a machine. He’s unbelievable. He’s the best heavyweight in the world. For us, as a league, that is a big part of our calling card, right? Because some people kind of look at us as the new kid on the block in some ways and so for us, being one of the newer companies, to have the best heavyweight in the world and him having proven that as the World Heavyweight Champion, that’s a big feather in our cap. No matter what the budget might be somewhere else, you don’t have Jacob Fatu and we do and he’s the best.”

For St. Laurent and MLW, the return to action marks the culmination of months of planning and positioning the company in a place to succeed going forward.

“One of the big goals when the shutdown started for the pandemic and we didn’t know the exact timetable for when we were coming back, was how do we do it safely, even if we have to wait longer than other places?” St. Laurent said. “I also wanted it to be with the strongest roster that we ever had. We have some great surprises coming up in the coming weeks. So that was a big benchmark for us – we have this downtime, so how can we make sure when we come back that the MLW roster is fully loaded, the most impressive that it’s ever been? And we definitely accomplished that.”