Only one team has ever taken the Grey Cup south of the border, and the Baltimore Stallions made that history after experiencing crushing disappointment. BC Lions kicker Lui Passaglia denied the Stallions a historic championship with a last-second Grey Cup-winning field goal in 1994, so Baltimore returned in 1995 and took their revenge out on the rest of the league. Baltimore finished the regular season 15-3, scoring more than 30 points per game, and scoring more than 40 points five times. Baltimore running back Mike Pringle was seemingly untouchable in 1995, leading the CFL in rushing yards (1,791) and yards from scrimmage (2,067). Pringle became the first CFL player with back-to-back seasons with more than 2,000 yards from scrimmage. And even if the winds were howling in Regina throughout 83rd Grey Cup, quarterback and game MVP Tracy Ham kept leading the Stallions down the field. Baltimore’s 37-20 win over Calgary was the culmination of a 13-game winning streak. 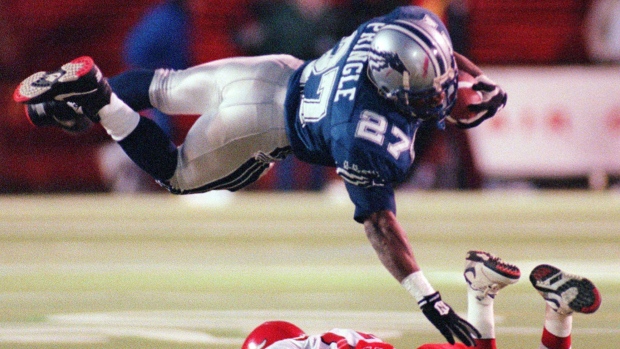 Three Grey Cup championships for three different cities. Two Most Outstanding Player Awards. More than 16,000 rushing yards and 137 touchdowns. Pringle will always be one of the CFL’s great unstoppable forces.

THE STAT: 1, the only American team to win a Grey Cup

Amid the many passionate opinions about the CFL’s American expansion experiment, the Baltimore Stallions were worthy champions of professional football’s oldest championship. Even after all the American CFL teams disappeared following the 1995 season, the Stallions legacy continued to live on in – and torment – the CFL when the franchise moved to Montreal and became the reborn Alouettes. From its beginnings in Baltimore in 1994 through its move to Montreal in 1996, the Stallions and then the Alouettes would have just one losing campaign over their first 17 seasons.