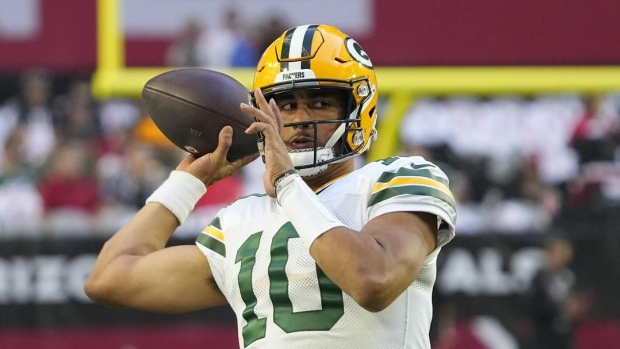 GREEN BAY, Wis. -- Green Bay Packers backup quarterback Jordan Love, who has been taking most of the midweek practice reps while Aaron Rodgers treats and rests his fractured pinkie toe, was placed on the reserve/COVID-19 list on Monday.

The team made the announcement on the day players returned to the facility from their bye week. Love, who has said he is vaccinated, would have been part of the group of players tested upon their return for their week off. Unvaccinated players who have not had COVID in the last 90 days would have been tested daily during the bye.

Love has taken only one game snap since his Nov. 7 start against the Kansas City Chiefs, the game Aaron Rodgers missed while he was on the COVID list. It was a kneel-down play on Nov. 21 against the Vikings, when Rodgers went into the locker room shortly before halftime to get treatment on his toe.

However, Love handled all the starting quarterback practice duties leading up to the Nov. 28 game against the Rams.

Rodgers elected not to have surgery on his toe during the bye week, but coach Matt LaFleur wasn't ready to say whether Rodgers would practice much, if at all, this week in advance of Sunday night's game against the Chicago Bears.

"I know he was getting treatment and doing everything he can to be 100 percent," LaFleur said Monday. "I still think it's a process like anything, and we'll see where he's at this week. Hopefully we can get him out there at practice, but if not, we've got a lot of confidence in just his ability to go out there and play at a high level."

The only other quarterback the Packers have is Kurt Benkert, who is on the practice squad. He, too, was on the COVID list this season, but returned to the team on Nov. 15.