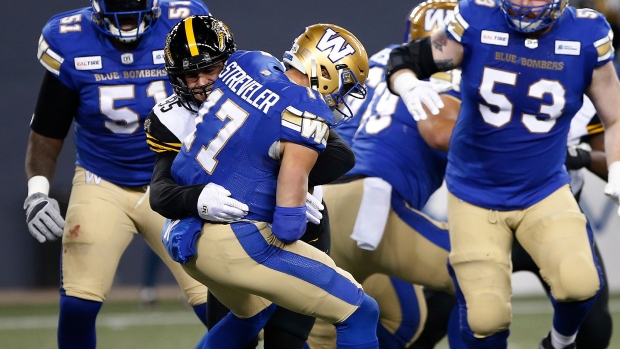 CALGARY — A look at the 107th Grey Cup game between the Hamilton Tiger-Cats and Winnipeg Blue Bombers on Sunday at McMahon Stadium:

THE TEAMS: The Ticats (15-3 in the regular season) set a franchise record for victories and won all 10 games at home, including last week's East final against the Edmonton Eskimos. The Blue Bombers (11-7) took one of the hardest possible paths to the final, finishing third in the West before recording road playoff wins over the Calgary Stampeders and Saskatchewan Roughriders.

THE LINE: As of Friday afternoon, Bodog listed the Ticats as a four-point favourite.

THE DROUGHTS: The teams carry the longest Grey Cup droughts among active teams into the contest. Hamilton hasn't won since 1999, while Winnipeg last captured the title in 1990. Meanwhile, West teams have won the past five Grey Cups at West stadiums. The Montreal Alouettes were the last East team to win in the West, defeating the Roughriders in 2010 in Edmonton.

THE SEASON SERIES: The Ticats went 2-0 against the Bombers, winning 23-15 in Hamilton in July and 33-13 in Winnipeg in September. Hamilton's Jeremiah Masoli and Winnipeg's Matt Nichols (both now out with injuries) were the starting quarterbacks in the first game, while current Ticats starter Dane Evans faced Chris Streveler in the second contest.

THE FORECAST: The Sunday evening weather in Calgary calls for a high of -2 C. No significant precipitation is expected.

THE QUARTERBACKS: The odds of Hamilton's Evans and Winnipeg's Zach Collaros being the starting quarterbacks for these teams in the Grey Cup would have been astronomical prior to the season. Evans replaced Masoli after the latter quarterback suffered a season-ending knee injury in August and the Ticats haven't missed a beat. Collaros, who suffered a concussion in the season opener while playing for Saskatchewan, was traded twice this season — first to the Toronto Argonauts and then to Winnipeg. The former Hamilton QB got his first start for Winnipeg in the Bombers' season finale and then guided the team to two playoff wins. Collaros is the third starting QB for Winnipeg this year.

THE COACHES: Hamilton's Orlondo Steinauer (first year as head coach) and Winnipeg's Mike O'Shea (sixth year) have worked together as players and assistant coaches with the Argos. O'Shea's contract expires after this year, but the Bombers say they want him back.

THE STARS: Hamilton receiver/returner Brandon Banks was named the CFL's most outstanding player this season. Primarily a returner during his first four years in Hamilton, the diminutive Banks started getting far more receiving reps when previous coach June Jones took over halfway through the 2017 season and has thrived in a dual role. Winnipeg defensive lineman Willie Jefferson was named the league's top defensive player this year. He was third in the league with 12 sacks and recorded a league-leading six forced fumbles.

THE REMATCH: Ticats star linebacker Simoni Lawrence faces Collaros for the first time since a high hit sidelined the then-Roughriders quarterback with a concussion in the CFL season opener. Lawrence, who was suspended two games, has praised and congratulated Collaros for his play this week.

THE TOP CANADIANS: Blue Bombers running back Andrew Harris, a Winnipeg native, led the league in rushing. But he was not named the team's top player or top Canadian as voters went in a different direction after a positive drug test resulted in a two-game suspension for Harris earlier this year. Hamilton offensive linemen Chris Van Zeyl (Fonthill, Ont.) and Brandon Revenberg (Essex, Ont.) were named top lineman and Canadian, respectively, for the Ticats.

THE LAST GREY CUP IN CALGARY: Montreal beat Saskatchewan 28-27 in a thriller in 2009. Als kicker Damon Duval missed a potential winning field goal on the last play of the game, but got a second chance after the Roughriders were called for too many men on the field. Duval was good on the second try to give the Als the win.