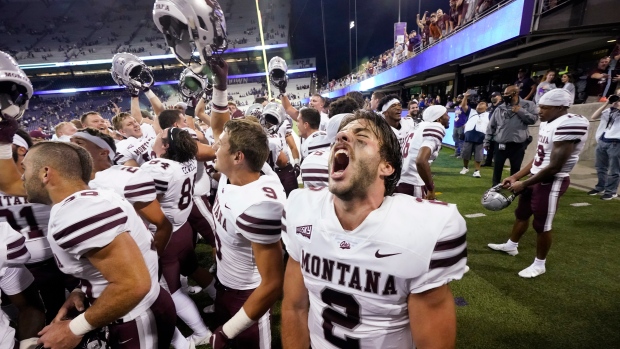 Montana quarterback Cam Humphrey scored on a 4-yard run early in the fourth quarter, and the Grizzlies added a short field goal with 2:54 left to take a six-point lead.

Needing a touchdown to avoid the stunning upset, Washington’s Dylan Morris was incomplete on fourth-and-2 with 1:33 left giving the ball back to the Grizzlies.

Montana was able to run only 21 seconds, and Kevin Macias’ 50-yard field goal attempt was well short. Given one more chance, Washington reached the Montana 43, but Morris’ pass was intercepted by Marcus Welnel with 31 seconds left and those in maroon and silver started a wild celebration.

Montana is the first FCS team to beat a ranked FBS team since North Dakota State won at No. 13 Iowa 23-21 early in the 2016 season, and the fifth time it has happened since Appalachian State’s famous upset of No. 5 Michigan in 2007. It was Montana’s second victory over Washington, the last coming in 1920.

A regular powerhouse from the FCS division, the Grizzlies frustrated Washington all night into one of the most embarrassing losses in program history. Washington had received scares in the past by FCS programs — most notably a couple of times by Eastern Washington.

But the Grizzlies were stout defensively and opportunistic enough on offense to pull off one of the biggest wins in school history.

Morris scored on a 1-yard keeper on Washington’s opening possession but it was otherwise an ugly performance for the offense. Morris threw a pair of costly interceptions and the Huskies had no downfield threat with three of its top four wide receivers out for the game.

Washington’s offensive line that returned all its starters was matched up front by the Grizzlies. Washington managed just 65 yards rushing and averaged 2.4 yards per carry.

Humphrey was 12-of-23 passing for 105 yards. Xavier Harris rushed for 70 and Isiah Childs added another 39, including a key 12-yard run on third-and-12 midway through the fourth quarter.

Montana hadn’t reached Washington territory since the opening drive of the game, but put together a 69-yard drive early capped by Humphrey’s 4-yard run to take a 10-7 lead. The Grizzlies had four plays of 10 or more yards on the drive after going eight consecutive drives where they gained less than 10 net yards each drive.

Washington went three-and-out on its next possession after Morris was sacked. Montana took over in Washington territory and drove to the Washington 5 before Macias hit from 22 yards with 2:54 left.

Montana: The Grizzlies were incredibly impressive on defense, especially on the defensive line. Washington’s inability to run the ball consistently and the pressure getting to Morris was the difference in the game. Morris was sacked three times along with the three interceptions.

Washington: Washington has no big play threats downfield due to a lack of wide receivers. Terrell Bynum, Rom Odunze and Jalen McMillan were all unavailable for the Huskies. Texas Tech transfer Ja’Lynn Polk was expected to have a big role, but had a 13-yard reception on the first play of the game and never returned due to an apparent injury.

Washington: At Michigan next Saturday