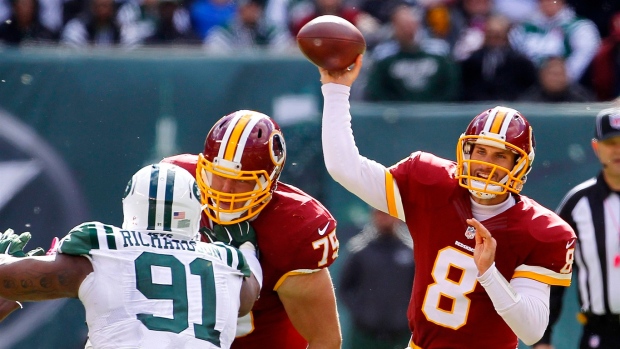 ASHBURN, Va. - Even if Washington Redskins coach Jay Gruden senses his team's season is on the verge of spiraling out of control, he is not giving any thought to replacing Kirk Cousins as his starting quarterback.

The Redskins can't prevent Cousins from turning over the ball, can't hold a halftime lead or play well in the third quarter, can't keep their players healthy and, lately, can't win.

After going 4-12 in Gruden's first season as an NFL head coach, Washington is 2-4 heading into next weekend against the visiting Tampa Bay Buccaneers (2-3), which he called "a big, huge game for us."

On Sunday, when Cousins threw two more picks in a 34-20 loss at the New York Jets, Gruden referred to the upcoming game against the Bucs as "critical" and "code red for us."

That would have to include Cousins, who has played two interception-free games this season — probably not coincidentally, Washington's two victories. In each of the four losses, the fourth-year quarterback has been picked off twice.

"I just feel like that right now, at this time, Kirk gives us the best chance to win, still," said Gruden, who elevated Cousins from Robert Griffin III's backup to starter toward the end of the preseason. "I want to see him fight through this. That will be the making of a strong person, a strong football player — how they react to some tough times and how they improve. I'm excited to see him bounce back and have a big bounce-back game this week and coming weeks. We'll see how it goes."

Gruden defended Cousins by saying he is capable of making every throw required of an NFL quarterback and noting that other QBs throw interceptions, too.

He also said other Redskins players have confidence in Cousins.

In evaluating Cousins at a postgame news conference Sunday, Gruden mentioned that it was a "little windy."

"I talk too much," Gruden said Monday. "But I'm not trying to make excuses for anybody. It wasn't good enough by anybody — not Kirk, not myself, not the offensive line, not the coaching staff. There's nobody in this locker room who played good enough to win a football game Sunday afternoon. I'm not making excuses for anybody. I'm not trying to baby anybody."

NOTES: Gruden said all of Washington's players who were injured Sunday are considered day to day: S Trenton Robinson (sprained ankle), RB Chris Thompson (bruised lower back), CB Bashaud Breeland (bruised knee), OT Ty Nsekehe (foot). ... WR DeSean Jackson's status for the Bucs game is still up in the air because last week he tweaked the left hamstring that has sidelined him since the season opener. "You have to get that thing back to 100 per cent before you go," Gruden said, "otherwise, it will get worse."