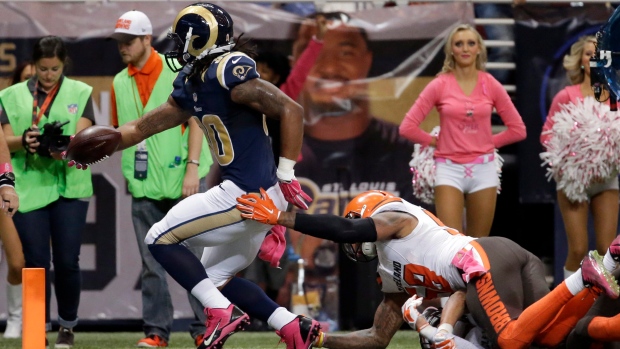 ST. LOUIS - Todd Gurley heard the fans chanting his name. The rookie is commanding that kind of attention.

Gurley rushed for 128 yards and his first two NFL touchdowns, helping the St. Louis Rams put away the Cleveland Browns 24-6 on Sunday.

"It's not all me," he said. "We've just got to keep improving and executing."

During the week, coach Jeff Fisher said Gurley wasn't yet 100 per cent. He looked pretty dominant against the Browns, hurdling tacklers on at least two occasions and churning for extra yards up the middle.

"He's a playmaker," teammate Kenny Britt said. "He can change the game and he's going to really help us out."

Coming off its bye, St. Louis (3-3) had four sacks and recovered four fumbles. The Rams scored 10 points off miscues on Cleveland's first two series, a 17-yard fumble recovery by Rodney McLeod and a field goal after the first of William Hayes' two sacks and strips of Josh McCown on the day.

"Giving up six points is great," McLeod said. "You can't ask for anything more than that."

Johnny Manziel got mop-up duty for the Browns (2-5) after McCown left for the locker room favouring his right shoulder with about four minutes left. McCown said he was hurt on the second sack/fumble when he was hit on the elbow.

"I felt something in the back of my shoulder," McCown said. "Again, I'm not going to comment anymore on that."

Manziel fielded just as many questions about an ongoing NFL investigation as he did the possibility of starting next week at home against Arizona. The league is looking into whether he violated its personal conduct policy.

Manziel was questioned on Oct. 12 by police in Avon, Ohio, after the 2012 Heisman Trophy winner and girlfriend Colleen Crowley argued while he drove on a highway. Crowley told police that Manziel hit her several times.

Manziel denied striking Crowley, was not arrested and the couple was allowed to leave together. He said he hasn't talked to an NFL official.

McCown is 1-5 as the Cleveland starter and has lost to the Rams for three straight seasons with three different teams. He was with Chicago in 2013 and Tampa Bay last year.

Gurley scored on runs of 1 and 16 yards. He fell short of joining Hall of Famers Eric Dickerson and Marshall Faulk as the lone Rams players to gain 140 or more yards for three straight games.

Gurley had a big grin on his face as Britt followed him back to the bench and waved his arms at the crowd in celebration after the running back scored his second TD in the fourth quarter.

Fisher was on the field frantically waving for a timeout just before the snap on Gurley's first career touchdown that made it 17-6 late in the third. Gurley ambled in untouched from a yard out, and Fisher spun the headset wire around his legs as he retreated to sideline.

Browns cornerback Pierre Desir, starting in place of injured Joe Haden, struggled on that drive. He interfered with Britt for a 26-yard penalty, and then was beaten on the next play by Britt on a 41-yarder to the Cleveland 1.

Gurley reversed field on a 48-yard jaunt to the Cleveland 22 on the Rams' first possession of the second half, but St. Louis got nothing out of it. The offence stalled and Greg Zuerlein hooked a 35-yard field goal attempt just wide right.

The Rams led 10-0 after the first quarter despite mustering just 3 yards offence and getting dominated in time of possession, with the Browns holding the ball for 11 minutes and 34 seconds.

"It looked like we had a little bye-week hangover," Fisher said.

McCown was 26 for 32 for 270 yards with no TDs or interceptions. Gary Barnidge was his top target with six catches for 101 yards, although the tight end's streak of four straight games with a score ended.

Barnidge had a tooth knocked out and his lip stitched at halftime.

NOTES: Browns WR Andrew Hawkins was evaluated for a concussion in the fourth quarter. ... The Browns have gone 19 consecutive games without a 100-yard rusher and totalled 82 yards on 24 attempts for a 3.4-yard average. Robert Turbin led the team with 30 yards on five carries. ... The Rams have played 18 in a row without a 300-yard passing game. Nick Foles was 15 for 23 for 163 yards with no TDs or interceptions.