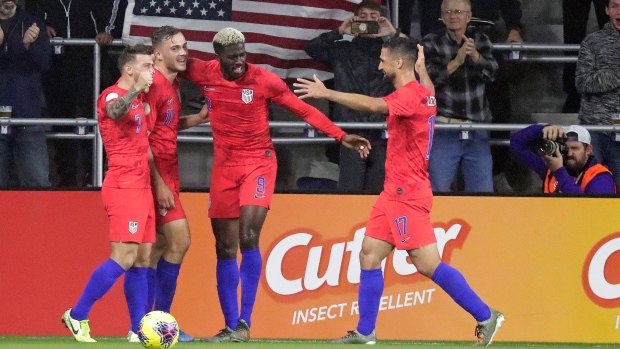 ORLANDO, Fla. — Gyasi Zardes had a pair of goals to lead the United States past Canada 4-1 on Friday night in CONCACAF Nations League play.

Jordan Morris and Aaron Long also scored as the Americans (2-1-0) took a 3-0 lead in the first half. Sergino Dest set up Morris's goal in the second minute of his American competitive debut.

Steven Vitoria replied for Canada (3-1-0 in Group A) in the second half.

The Canadians would have advanced to the final four of the Nations League with a win or a tie against the Americans.

"Credit to the U.S.A. as they were clinical with their 12 shots to our 11 and they came away with four goals," said Canada's coach John Herdman. "We will learn from this, but there's enough in our performances over the two games that tells us that we are right there with them."

Canada also needs to secure valuable ranking points to stay in the top six in CONCACAF. The top six teams in the region as of next June earn berths in the so-called Hex, the most direct route for World Cup qualifying.

The Canadians jumped into sixth in CONCACAF and 69th in the world after their 2-0 win over the U.S. (second in CONCACAF, 23rd in the world) on Oct. 15, but their place in the rankings is far from secure.

El Salvador sits seventh in CONCACAF, and while it doesn't have a lot of points to be gained from upcoming matches against Montserrat and the Dominican Republic, it currently trails Canada by just three ranking points.

Curacao was eighth in CONCACAF before losing to Costa Rica 2-1 on Thursday. Panama was ninth before losing 3-0 to Mexico later Friday.

Morris volleyed the ball into the net from the back post on a quick redirect from a corner kick in the second minute of play. It was Morris's eighth goal at the international level. Canada had not allowed a goal in its previous 284 minutes.

Scott Arfield thought he had earned a free kick — or even a penalty — after being taken down near the box in the 20th minute but the officials kept the play going.

Morris sent a cross to Zardes, who scored on a header in the 23rd minute as the Americans quickly picked apart Canada's defence to take a 2-0 lead.

Lucas Cavallini and Samuel Piette got tied up with U.S. goalkeeper Brad Guzan in 30th minute while challenging for a high cross. After getting knocked to the ground Guzan exchanged words with the Canadians and had to be separated by the referee.

Poor defending again cost Canada in the 34th minute. Tim Ream sent in a long curling cross on a free kick outside the box and Long jumped up to send in a header to make it 3-0.

Milan Borjan earned a yellow card in the 45th minute while arguing a call with the referee. He was angry after the U.S. was awarded a penalty kick in the box after Alphonso Davis juggled the ball on his feet and then headed the ball to Borjan, who caught it.

Several Canadians had to restrain Borjan as he shouted at the official. After he was calmed the Canadians managed to clear the ball out of the area and keep it 3-0 heading into halftime.

Canada finally got on the scoreboard in the 72nd minute when Arfield's corner kick was tipped by Jonathan Osorio to Vitoria, who headed in near the back post.

The corner kick was made possible after Junior Hoilett fired a stinging shot at the top-left corner of the American goal but Guzan got a glove on it to send it over the crossbar.

"The boys kept going and I was proud of their attitude, they came with belief that they could win the game and they left it all out there," said Herdman. "At this level, games are won and lost on set pieces and transitional moments. We lost in these areas tonight."

Zardes rifled his second goal of the night into the net when a deflection bounced to him in the box. He was unmarked and able to settle the ball down before taking his shot.

Friday's match wrapped up Canada's 2019 international season. The Canadian team won won a joint-record six competitive matches over the course of the season including a quarter-final finish at the 2019 Concacaf Gold Cup and three wins in Concacaf Nations League A. .

"We came here to face a strong American team, like we did a month ago in Toronto," said Vitoria. "There are a lot of lessons to be taking from here, we will learn from this.

"One night will not put into question all the work that has been put into this."

The U.S., which has not lost a home game to Canada since 1957, was missing several injured regulars, including midfielder Christian Pulisic, goalkeeper Zack Steffen and midfielders Michael Bradley and Tyler Adams. Just four of the starters were on the field for the opening whistle of last month's loss: Long and defender Tim Ream, McKennie and Morris.