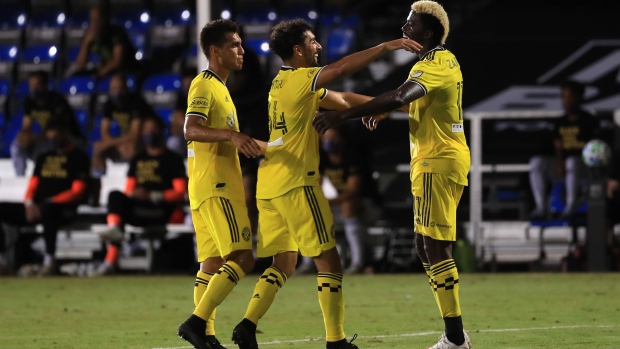 The game started after 11 p.m. local time because the earlier match between Atlanta United and the New York Red Bulls was delayed by lightning in the area. The tournament is being played without fans at ESPN's Wide World of Sports at Walt Disney World.

Lucas Zelarayan scored on a free kick in the 27th minute that curled over the wall and just tapped the post. It was the Argentine’s second goal of the season.

Zardes scored three minutes later. He added his second goal in the 49th minute with an assist from Zelarayan.

Youness Mokhtar added the final goal in the 60th minute.

Jaap Stam coached his first game with Cincinnati. He was hired in May, following the departure of Ron Jans in February.

Cincinnati opened the season with a pair of losses before the league was shutdown because of the coronavirus on March 12.

Columbus had a win and a draw to open the regular season.

The 24 teams playing in the World Cup-style tournament are divided into six groups for the preliminary stage, with results counting toward the regular season. Nashville SC and Dallas FC were forced to withdraw because of positive COVID-19 tests.

Cincinnati was without forward Jurgen Locadia because of a quad injury.

Sebastian Berhalter, the son of U.S. men's national team coach Gregg Berhalter, made his pro debut for the Crew in the 77th minute.