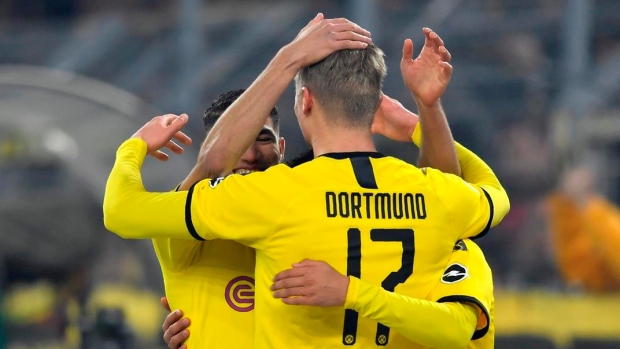 DORTMUND, Germany — Erling Haaland scored his ninth goal in six games for Borussia Dortmund as they swept past Eintracht Frankfurt 4-0 in the Bundesliga on Friday.

Achraf Hakimi ran the game from right back for Dortmund, cuing up Lukasz Piszczek to score the opening goal. Jadon Sancho made it 2-0 with a solo goal before he and Hakimi combined in the buildup to Haaland's third.

Dortmund overtook Leipzig for second place in the league with the win and was just one point off leader Bayern Munich, which plays Cologne on Sunday.

Six days after the defence allowed two late goals in a 4-3 loss to Bayer Leverkusen, Dortmund's back line looked much improved against Frankfurt, which had few clear chances in its biggest defeat of the season. Next up is Paris Saint-Germain in the Champions League on Tuesday.

"It's really important, especially that we gave up few chances. I think they had one shot," Dortmund defender Mats Hummels said. “We were very concentrated and switched on in every position.”

A Europa League semifinalist last season, Frankfurt is having an underwhelming Bundesliga campaign in ninth but has specialized in beating Germany's top clubs. It hammered Bayern 5-1 in November and has defeated Leipzig twice.

"We were just too harmless up front," Frankfurt midfielder Sebastian Rode said.

Dortmund nearly took the lead early on when Raphael Guerreiro hit the post.

The breakthrough came in the 33rd when Hakimi, on loan from Real Madrid, controlled a loose ball and spotted Piszczek arriving on the edge of the box. Piszczek picked up Hakimi's pass and blasted the ball low between two defenders in the bottom corner, for the 34-year-old Pole's first league goal since November 2018.

Sancho dribbled in from the left flank and dodged two defenders before scoring his 13th goal of the season shortly after the break.

Four minutes later it was Haaland's time to score, applying a simple finish after Hakimi played a one-two with Sancho and fed the 19-year-old Norwegian striker with a low cross.

Guerreiro added the fourth in the 74th after Frankfurt's defence dispossessed Haaland but failed to clear properly.