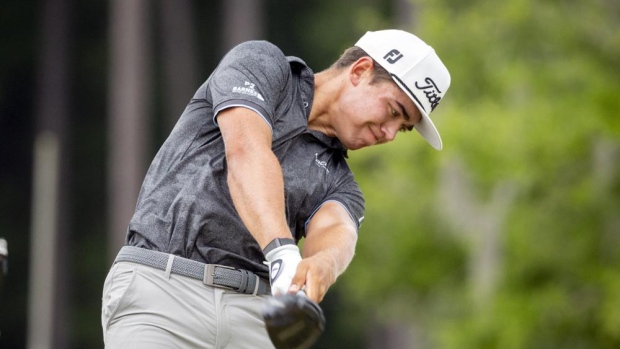 RIDGELAND, S.C. (AP) — Garrick Higgo's day began with a call from South African golfing great Gary Player. It ended in triumph just like so many of Player's Sundays did in his Hall of Fame career.

The 22-year-old Higgo won the Palmetto Championship at Congaree for his first career victory on the PGA Tour, taking the tournament after leader Chesson Hadley squandered a two-shot lead with bogeys on his final three holes.

The 85-year-old Player told his rising, young countryman not to worry about trailing leader Chesson Hadley by six shots starting the final round.

“He'd told me he's done it before, won quite a few times from six behind, seven behind,” Higgo recalled. “Just try and do your thing and stay up there. You don't know what can happen.”

Player was right as Higgo remained patient and steady throughout — and made sure to take advantage when opportunities arose.

The left-hander did that with a closing 3-under 68 — his fourth round in the 60s this week — charged by an eagle on the par-5 12th hole and a birdie on the 14th to reach 11-under, the winning score.

Higgo kept himself in position on the challenging 17th hole, rolling in a 10-foot par save after not hitting the fairway on his first two shots.

Higgo sensed the moment was his if he could sink the putt. “I had a good feeling on that,” he said with smile.

He also benefitted from a late collapse by Hadley, who held the lead after the second and third rounds. Hadley, seeking his first tour win since 2014, was still ahead by two shots starting the 16th hole. But a wayward tee shot led to a bogey there and he failed to get up and down on the 71st and 72nd holes to give away the win.

“I can only imagine what it looked like on TV because it looked freaking awful from my view,” he said. “I just didn't have it today. It was bad and (I've) got to do better and I will.”

Player later posted his congratulations to Higgo on social media. Player called it “one of the most enjoyable things for me to witness in my career. He is without a doubt the most humble, well mannered young man that you could wish to meet. Watch this space, big things to come!”

Higgo had won twice on the European Tour in the Canary Islands before playing in the PGA Championships on Kiawah Island, where he tied for 64th. He'll head West to Torrey Pines for the U.S. Open next week.

After that, Higgo thinks he'll likely fulfill his dream of playing regularly on the PGA Tour. His win makes him exempt through the 2023 season. He also earned $1.314 million for the career-altering victory.

When Higgo tapped in for par on the 18th, he headed off to wait for a potential playoff. Turns out, he didn't need the extra reps as Hadley missed a 10-footer for par to fall to give the rising young player his first signature win.

Higgo took off his sunglasses and grinned when told of his victory, then hugged his caddie to celebrate.

Top-ranked Dustin Johnson made a run at the top late in the round, coming within a shot of Hadley after birdies on the 10th, 12th and 13th holes. His chances ended with a triple bogey on the 16th hole and he finished with a 70 to tie for 10th.

Swafford came close to playing next week at the U.S. Open. A win at Congaree Golf Club would've meant a cross-country flight to Torrey Pines. He, too, came close and was within two shots of the lead before finishing tied for fourth.

The tournament at Congaree filled in for the RBC Canadian Open, which was canceled for a second straight year due to COVID-19.

The run capped an unprecedented stretch of golf in the Palmetto State.

And now, another lefty in Higgo brands himself a future star with his first win on tour.