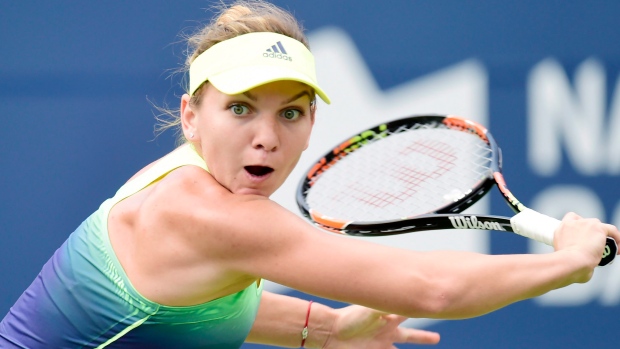 TORONTO - It's hard not to be staggered when taking a glance at the player biography of Serena Williams.

She's also showing no signs of slowing down.

Williams has won the first three Grand Slams of the season and will be a good bet to make it a sweep at the U.S. Open if her play at this week's Rogers Cup is any indication. She continued her run of strong form Friday night with a 6-4, 6-3 victory over Roberta Vinci.

If Williams feels she has improvements to make, the rest of the players on the WTA Tour should be even more concerned.

Few athletes have the commanding presence that Williams possesses on the court. She strikes when she needs to and it's done with incredible force.

If an opponent can manage to get a racket on her imposing serve, good luck with the rally. Williams is the rare player who seems to be able to find another gear when needed and simply overpower the competition.

Vinci was no pushover on a humid, overcast evening on Centre Court at Aviva Centre. The veteran Italian tried to slow the pace by working in regular backhand cut shots that forced Williams off the baseline.

The 33-year-old American was usually up to the challenge, eventually wrapping things up in a tidy 78 minutes. Williams will next face rising Swiss star Belinda Bencic, who defeated fifth-seeded Ana Ivanovic of Serbia 6-4, 6-2 in the nightcap.

Earlier in the day, second-seeded Simona Halep recovered from a slow start for a 0-6, 6-3, 6-1 win over sixth-seeded Agnieszka Radwanska of Poland. Halep will face 15th-seeded Sara Errani of Italy, who held off Ukrainian qualifier Lesia Tsurenko 6-4, 6-4.

"I started the match and I was hitting the balls very strong, and it was not a good idea playing against Radwanska because she knows how to blow the balls and how to make you run during the point," Halep said. "So I just tried to keep more at ease during the point and to make her run."

It was Halep's 300th career victory. The Romanian said she got a nice boost from the crowd on Centre Court.

"Today when I was down 0-5, they were supporting me like I was up 5-0," she said. "So it was amazing and they gave me power just to stay there, still fighting for the victory, you know. Sometimes you take the power from the crowd and today helped me a lot.

"I stayed there very focused and I said that I can do it with them."

The Canadian team of Sharon Fichman and Carol Zhao were eliminated Friday after dropping a 6-2, 6-2 quarter-final decision to Kristina Mladenovic of France and Karolina Pliskova of the Czech Republic. Fichman, from Toronto, and Zhao, of Richmond Hill, Ont., were a wild-card entry.

Top-seeded Martina Hingis of Switzerland and Sania Mirza of India advanced with a 6-4, 6-2 victory over Hao-Chang Chan and Yung-Jan Chan of Taiwan. Fourth-seeded Caroline Garcia of France and Katarina Srebotnik of Slovenia defeated Romanians Irina-Camelia Begu and Raluca Olaru 6-3, 6-2.

In the evening doubles match, sixth seeds Errani and Flavia Pennetta of Italy dropped a 6-0, 7-6 (6) decision to No. 3 Bethanie Mattek-Sands of the United States and Lucie Safarova of the Czech Republic.

Notes: Toronto rapper Drake was in attendance. ... Justine Henin will be inducted into the Rogers Cup Hall of Fame on Saturday evening. The ceremony is scheduled to begin after the first match of the night session. ... Williams has won the Rogers Cup on three occasions: 2001, 2011 and 2013. She lost to her sister Venus in the semifinals last year in Montreal.