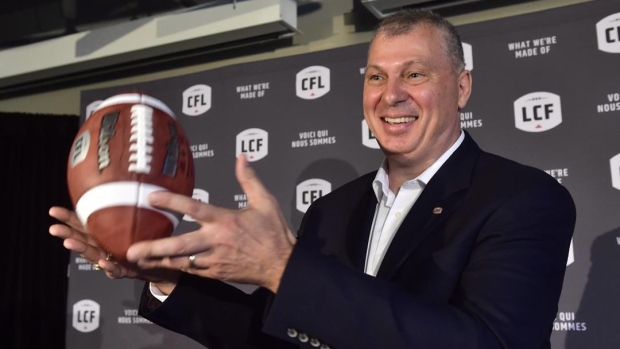 Halifax council has voted to take a closer look at a proposed 24,000-seat stadium, the pivotal component of a bid to land a Canadian Football League team for the East Coast's largest city.

In a unanimous decision, council has directed municipal staff to complete a thorough review of the business case put forward by Maritime Football Limited Partnership, which is in the final stages of securing a conditional CFL expansion franchise.

City staff are also expected to seek changes to the city's charter that would potentially allow for a special tax arrangement and assist with debt financing of the massive project — pending the outcome of the business case analysis.

"So that's what I want to see when this comes back, is it the right cost?"

The group has proposed Shannon Park, a 38-hectare swath of land on the east side of Halifax harbour, as the preferred location for the stadium, which comes with an estimated price tag of up to $190 million.

Anthony LeBlanc, founding partner of Maritime Football, said he felt good about council's 15-0 vote to move the process along.

LeBlanc said he felt confident his group would be able to continue to work with city staff, the province, landowner Canada Lands Company, and the Millbrook First Nation.

"Ultimately there's optimism that we can do this as long as everybody is at the table understanding what the shared risk is."

LeBlanc said the city has made it clear it is not interested in owning the stadium, which would be the responsibility of his group.

"They are not averse to being involved as financial partners because they see the value a stadium brings, but their biggest concern was the ongoing risk of operating a facility. We understand that; it's not our only contribution but it will be our main contribution."

However, LeBlanc made it clear that the initiative would need some form of help from the municipality, province and even the federal government.

Premier Stephen McNeil said Tuesday that the provincial government has not been asked for anything at this point, but he believes it will be.

"We've said that anything we put in will not come out of general revenue, so in other words it would have to be a new revenue source," said McNeil. "But we have not said no to this."

Halifax's top bureaucrat told council the proposal is for more than a football stadium.

Dube said the stadium would host a variety of sporting events, concerts and cultural celebrations.

He said Maritime Football is analyzing winter options as well, including a full-time outdoor skating rink or an air-inflated sports dome.

Yet Dube admitted that the biggest question is whether the project is feasible and will be supported by the community.

A report to council laid out a handful of possible funding options for the city and the province, including a public financing model called tax increment financing.

Owners of the Shannon Park development would pay property taxes on the real estate, but that money would be set aside by the municipality and returned as a payment against the stadium's debt.

"If the development generates $5 million a year in property tax, that would be applied against the debt of the facility," Dube explained.

However, he said the property tax funding would provide only a portion of the necessary cash.

Dube suggested council direct municipal staff to examine other options as well, including an increase to the hotel marketing levy and a new car rental tax.

Tony Mancini, municipal councillor for the area that includes Shannon Park, said he would like to see a residential component to the development.

"It's a vulnerable community," he said, noting that redevelopment of the Shannon Park lands — formerly used by the military for housing — is an opportunity to build affordable housing.

Maritime Football is in talks with Canada Lands Company to buy up to eight hectares of land for the stadium, a parking structure and "associated uses," the staff report says.

Savage said he needed to know more about such things as how the financing and taxation plan would work, how much risk there would be for city taxpayers, and whether the size of the stadium being proposed is right for the city.

"I think a stadium at Shannon Park would be completely awesome," he said. "If you are going to have a stadium there is some cost. This may be our best chance, but we have a lot of due diligence to do."

An urban planning expert said the discussion is bound to be polarizing for the community, with costly stadium projects often generating vigorous public debate.

"They draw a tremendous amount of public interest and often that interest can be polarizing with either very big supporters or those who are vehemently against any kind of public dollars flowing into what's seen as the pockets of rich and wealthy owners," said Jino Distasio, director of the Institute of Urban Studies at the University of Winnipeg.

"It's not uncommon to have a vigorous debate."

He pointed to controversy in Winnipeg over the Investors Group Field stadium. Earlier this year, the University of Manitoba said it will likely not recover more than $100 million owed from a loan to build the project, leaving the province to cover the shortfall.

"The outcome here is still mixed," Distasio said of Winnipeg's stadium. "I think the vast majority of people still appreciate that we have a wonderful new stadium but it has come with a price tag that we weren't necessarily prepared for from the beginning."

He added: "Careful financial planning and oversight is absolutely critical."

— With files from Keith Doucette