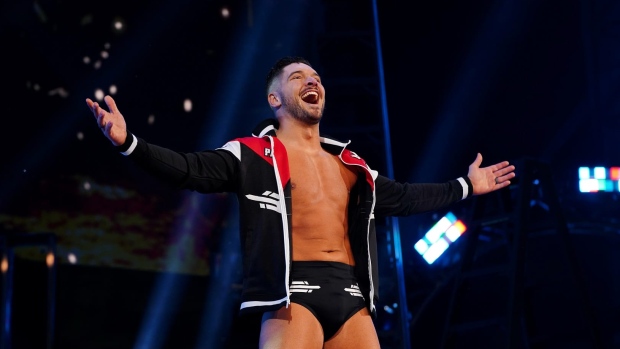 After making his AEW debut at the Revolution pay-per-view, Hamilton's "All Ego" Ethan Page will be in action for the first time on Dynamite when he takes on Lee Johnson. Plus, Darby Allin defends his TNT Championship and Christian Cage addresses AEW for the first time.

TNT Championship match: Darby Allin (c) vs. Scorpio Sky - With a victory on Wednesday night, Sky can join Kenny Omega as only the second person to carry two different titles in AEW. A former AEW World Tag Team Champion alongside SoCal Uncensored stablemate Frankie Kazarian, Sky earned his shot against Allin at Revolution when he defeated Ethan Page, Cody Rhodes, Max Caster, Lance Archer and Penta El Zero M in the Face of the Revolution ladder match. This will easily the biggest match of Sky's AEW career to date as he looks to prove that he's a lot more than simply a tag-team specialist. Allin comes into the match of the back of a brutal street fight at Revolution when he teamed up with Sting to defeat Team Taz's Brian Cage and Ricky Starks. Wednesday mark's Allin's third defence of his title and first since retaining against Joey Janela on the Feb. 4 edition of Dynamite. While Allin and Sky have never met in one-on-one competition in AEW, they have had one match in the past. At Northeast Wrestling's Over the Top event in 2019, Allin emerged victorious over Sky. Can Allin make it two straight over Sky or will we see a new TNT Champion?

AEW World Tag Team Champion Matt Jackson (w/ Nick Jackson) vs. Rey Fenix (w/ "The Bastard" PAC) - At Revolution, the Young Bucks retained their titles in a hard-fought contest against the Inner Circle team of Chris Jericho and MJF. That same night, Death Triangle's Fenix and PAC became the new No. 1 contenders for their titles by winning the Casino Tag Team Royale. Before that match can happen, Matt Jackson meets Fenix on Wednesday night to continue a storied rivalry that spans several years and several federations including Pro Wrestling Guerrilla, CHIKARA and AAA. Despite their countless run-ins, Jackson and Fenix have never met in one-on-one competition. This will be Jackson's first official singles match in AEW. Though Fenix is known as a tag-team wrestler alongside his older brother Penta El M Zero in the Lucha Bros., his singles experience is extensive. Fenix has held singles titles in AAA, The Crash and Lucha Underground among other promotions. Is that experience what will give him the edge over Jackson on Wednesday night? One thing is for certain, though - whenever Fenix and a Jackson brother get in the ring together, it's can't-miss TV.

Six-woman tag-team match: AEW Women's World Champion Hikaru Shida, Thunder Rosa and Ryo Mizunami vs. "The Native Beast" Nyla Rose (w/ Vickie Guerrero), Dr. Britt Baker, DMD (w/ Rebel) and "The Fired Idol" Maki Itoh - This match was born in the aftermath of the Women's World Championship match at Revolution. Just as Shida successfully defended her title in an arduous encounter with Mizunami, the two women were jumped by Rose and Baker. Their attack was fended off by the intervention of Thunder Rosa. The match was initially supposed to feature Rebel, but she was able to get out of it and was replaced by the foul-mouthed Itoh, who made her surprise debut at the PPV. Itoh is known as "The Fired Idol" because she is, well, a fired idol. A former pop star, Itoh was a member of J-Pop girl group LinQ before being dumped from the group by her record company. Wrestling in only her second match in North America, Itoh is still an unknown commodity in AEW, but shouldn't be underestimated. There's a great deal of bad blood among these six women and the chances for things to get out of hand on Wednesday night are high.

"All Ego" Ethan Page vs. Lee Johnson (w/ QT Marshall) - If you've been following independent wrestling in Southern Ontario for the past several years, then it will come as no surprise that Ethan Page has found himself in AEW. One of the best performers the province has to offer, Page's profile has risen greatly in recent years with work in places like IWA Mid-South, Absolute Intense Wrestling and Black Label Pro. But it was his work in Impact - as one half of The North/Monster Mafia with Toronto's Josh Alexander - that put the spotlight directly on him. After dominating the tag-team scene in Impact, Page is ready to go out on his own in AEW. Page made his debut with the company at Revolution in the Face of the Revolution ladder match, but was disappointed that he had to share the spotlight with five other competitors. Now given the opportunity to show AEW what he's all about in his first singles match, Page must not get overconfident as he takes on Johnson. Johnson has won four straight matches (in singles and tag-team competition) including a victory in his last time out on Dynamite when he teamed with Nightmare Family stablemate Cody Rhodes to beat Pretty Picture (Peter Avalon and Cezar Bononi). Can Johnson continue his winning ways and spoil Page's Dynamite debut?

- Fresh off of his shocking arrival at Revolution, Kitchener, Ont.'s very own "The Instant Classic" Christian Cage will address AEW for the first time

- After being unable to capture tag-team gold at Revolution, The Inner Circle holds a war council to entail where the faction goes from here