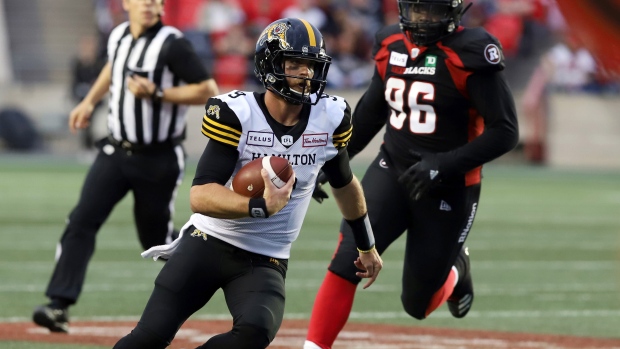 Ottawa Redblacks head coach Rick Campbell got a good look at his quarterback situation on Saturday.

Campbell played four different pivots in a 25-21 pre-season loss against the Hamilton Tiger-Cats at TD Place.

Dominique Davis and Jonathon Jennings, both vying for the starters job, pleased their coach in the first exhibition game of the year.

"When you watch both of them play there's lots of reasons for hope that good things are going to happen," said Campbell. "They did a good job."

Danny Collins and William Arndt split duties in the second half.

Davis, who served as Trevor Harris's backup last season, looked comfortable and confident, while Jennings still appeared to be getting comfortable with his surroundings.

On his very first play Davis connected with Caleb Holley for a 62-yard pass to put Ottawa deep in Hamilton territory.

"I was definitely satisfied with that first play, but once we watch the film I know there will be some things we need to correct," said Davis. "It was a good first pre-season game and something we can build on."

Jennings felt good, but admits there were a few plays he would have liked to have a second chance at.

"I thought my process was good and my reads were pretty good," said Jennings. "We'll continue to grow. Guys made some plays for me and the O-line did a good job protecting so it felt good to get out here."

It was also an exciting night for Hamilton's Orlondo Steinauer as he made his debut as a head coach.

"Anytime you win it feels great," said Steinauer. "I thought the guys battled. We have lots to work on, but anytime you win and give the guys that feeling in the locker room it's a great feeling."

"I thought we did a decent job for the most part," Steinauer said. "They got to our quarterback early and we were able to sustain some drives late on some key second downs that really helped out and our quarterbacks did a pretty good job taking care of the football."

Dane Evans played the first half for the Tiger-Cats, going 11 for 14 for 96 yards and one touchdown, while Hayden Moore took over in the second half and finished 15 for 22 for 176 yards and two touchdowns.

Tied 11-11 to start the second half, the Tiger-Cats were able to get the lead and held on despite giving up a kickoff return.

Moore connected with Josh Crockett for a 17-yard TD pass midway through the third, but it was short lived as DeVonte Dedmon had a 100-yard kickoff return to knot things up 18-18.

"That's a big play, so good for him," said Campbell. "He made a couple of big plays (Saturday) so good on him."

Moore then found Marcus Tucker in the end zone for a 34-yard TD pass late in the third quarter to take a 25-18 lead.

Ottawa rounded out its scoring with Mexican kicker Jose Maltos booting a 38-yard field goal early in the fourth to make it 25-21.

Lewis Ward scored three field goals for the Redblacks in the first half, while the Tiger-Cats gave up a safety when Evans was sacked in the Ottawa end zone.

Hamilton got on the board with a single, followed by Evans punching in a one-yard TD and Michael Domagala had a 42-yard field goal to round out the Tiger-Cats scoring.

Ottawa lost R.J. Shelton late in the first quarter. The receiver had just taken a punt return, but after just a few steps dropped to the ground. He required assistance to leave the field and had his left foot in an air cast.

The Redblacks wrap up pre-season play next Thursday in Montreal, while the Tiger-Cats host the Toronto Argonauts in their final exhibition game.