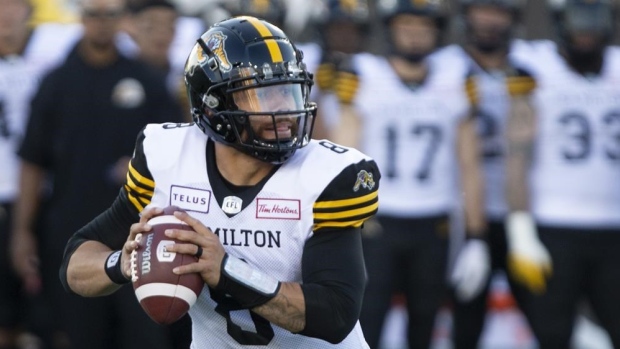 HAMILTON — The 2019 CFL season will start 30 minutes earlier than expected thanks to the Toronto Raptors.

Thursday's game between the Hamilton Tiger-Cats and visiting Saskatchewan Roughriders will begin at 7 p.m. ET instead of the originally scheduled 7:30 p.m., in an effort to avoid too much overlap with Game 6 of the NBA Finals between the Raptors and Golden State Warriors. The basketball game in Oakland, Calif., starts at 9 p.m.

You can watch the CFL opener LIVE on TSN1 and TSN3, while the Raptors can be seen on TSN4 and TSN5. Both events can be streamed live on TSN Direct.

The Ticats announced the move Tuesday, hours after Game 6 of the NBA Finals was confirmed with Golden State's 106-105 win in Toronto. The Raptors lead the best-of-seven series 3-2.

During the football game, the Ticats say select televisions around Tim Hortons Field will switch to the beginning of Game 6 of the NBA Finals.

The Tiger-Cats will open the stadium's gates to the public following the conclusion of the football game for fans to view the remainder of the NBA contest for free on the main video board.

TSN has broadcast rights for Game 6 of the NBA Finals and all CFL games.

"It's a very exciting time to be a sports fan in Canada with the start of the CFL season and the Toronto Raptors making their mark on Canadian sports history with this amazing run," Matt Afinec, president and chief operating officer of the Tiger-Cats, said in a statement. "With our home opener aligning with Game 6 of the NBA Finals, there's no better way to celebrate than to open the gates at Tim Hortons Field after the Ticats game and create our version of Jurassic Park at Tim Hortons Field."