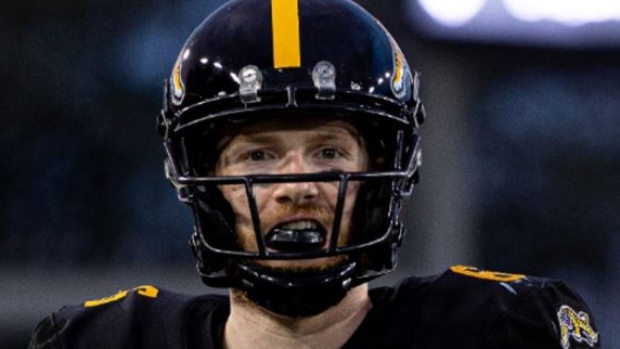 TORONTO — The COVID-19 pandemic might be wreaking havoc with Brian Jones' off-season conditioning but it's certainly enhancing his musical skills.

With gyms being closed due to the novel coronavirus outbreak, Jones has had to create a makeshift indoor workout facility at his Toronto apartment. But self isolation has also allowed the 25-year-old native of Enfield, N.S., to take up playing the electric guitar during his down time.

"I'm not cranking it too loud right now," Jones said during a telephone interview. "I'm able to play with my headphones on so I'm not pissing off too many people.

"My workouts are more the problem right now."

With gyms closed due to the novel coronavirus outbreak, Jones has had to be innovative in order to get his off-season conditioning in.

"Luckily I've been able to get my hands on some weights and turn the apartment into a weight room to the best of my ability," Jones said. "I've had to be closer with my neighbours as a result but I'm trying to stay in a routine."

The six-foot-four, 233-pound Jones is entering his fifth CFL season, second with Hamilton. The 26-year-old native of Enfield, N.S., appeared in nine regular-season games with the Tiger-Cats last year as well as the club's two playoff games _ including its 33-12 Grey Cup loss to the Winnipeg Blue Bombers.

Jones' best season was his first. After being selected in the first round, No. 4 overall, by Toronto in the 2016 draft, Jones had 12 receptions for 128 yards and a TD in 12 contests with the Argonauts before earning a Grey Cup ring with the club the following season.

Toronto dealt Jones to Saskatchewan in August 2018. After finishing out the campaign with the Roughriders, Jones signed as a free agent with Hamilton.

Jones has appeared in 43 career CFL games, registering 14 catches for 148 yards and a TD. Over four seasons at Acadia, Jones had 113 catches for 1,394 yards and eight touchdowns. He was an AUS all-star in 2014-14 and was also named the conference's outstanding player in 2014.

While the pandemic has forced Jones to be innovative with his workouts, it's also given him a lot of free time. The Ontario government has extended its Emergency Declaration until May 12, resulting in the closure of non-essential workplaces and restrictions on social gatherings.

So Jones makes sure he reads for at least an hour daily while also focusing on his newest purchase — an electric guitar.

"I've just been taking the time to try and better myself," he said. "With the virus, I think the best thing you can do is find ways to stay productive, stay in shape and keep your mental healthy happy because being stuck inside it's easy to fall into the loop of doing nothing all day.

"That's what I'm trying to get away from and find ways to better yourself and not see this as down time but as a time to improve yourself and come out of this better than you were before."

Jones said he's been playing an acoustic guitar for about three years and decided to take up the challenge of adding an electric guitar to his musical repertoire. He first began playing as a youngster, in part to learn how to play the iconic opening riff of Deep Purple's "Smoke On The Water."

"I remember when my dad took me to guitar lessons and the whole motive was I wanted to learn how to play Smoke On The Water," Jones said. "I was sitting there with the music instructor and I was kind of getting frustrated with what I was being taught and he was like, 'A lot of people come in here and they just want to learn Smoke On The Water.'

"And I was sitting there thinking, "I've just been busted'. Yeah, he taught me and once I got that I think the transaction was done. I didn't really take lessons after that."

Jones resumed playing guitar later on in his life before graduating to the electric version. But his newest purchase has been both a boon and a curse.

"I love the blues and I'm a big Stevie Ray Vaughan fan," Jones said. "There's a lot of good material on YouTube so I'll sit there and try to play it.

"But he's the only person who doesn't inspire me to play. That's not to say I don't like his music, it's because I can't play anything close to how he did."

Vaughan was an iconic and influential blues musician. He was the lead guitarist and frontman of the blues rock band Double Trouble before his death in a helicopter crash in 1990 at the age of 35.