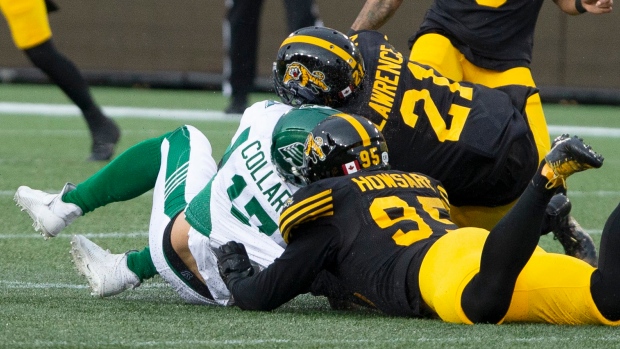 Hamilton Tiger-Cats linebacker Simoni Lawrence will have a hearing with the CFL on Saturday for his hit to the head on Saskatchewan Roughriders veteran quarterback Zach Collaros during the early stages of the season opener on Thursday, according to TSN's Farhan Lalji.

Lalji adds that the ruling will come no later than Monday.

#TiCats LB Simoni Lawrence will have his hearing with #CFL today. Ruling to come no later than Monday. @CFLonTSN #Riders @TSN_Sports pic.twitter.com/zgqYir0EKr

Lawrence lowered his shoulder and made contact with the Saskatchewan quarterback’s helmet as he was sliding at the end of a run on the third offensive play of the game. Collaros remained on the turf for several minutes after the hit before walking off the field under his own power. He exchanged words with Lawrence, his teammate for four seasons in Hamilton, as he left the field.