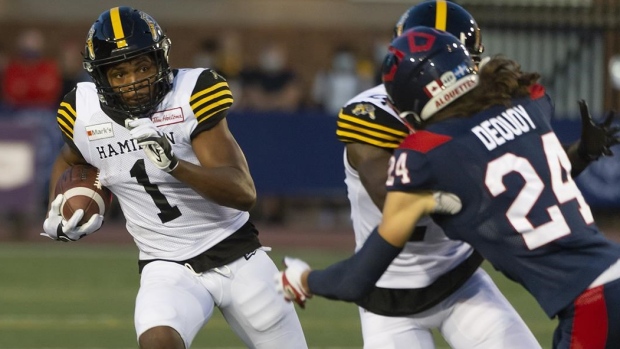 The CFL playoffs get underway on Sunday as the Hamilton Tiger-Cats host the Montreal Alouettes in the East Division semifinal.

Viewers can watch the Tiger-Cats take on the Alouettes on Sunday at 1:00pm et/10am pt on TSN1/4, the TSN App, and TSN Direct.

The Ticats enter the playoffs for the third consecutive year and, with a pair of playoff wins, have the opportunity to host the 108th Grey Cup at Tim Hortons Field in Hamilton on Dec. 12. The Tiger-Cats have reached the Eastern Final in each of their past three playoff appearances.

Ahead of Sunday’s clash, TSN examines how each team is trending heading into the postseason and the matchup against the East Division champion Toronto Argonauts that awaits the winner.

The Tiger-Cats enter the playoffs red-hot, having won four of their past five games. Hamilton averaged 30.25 points per game across the four victories while averaging an 18.5 point margin of victory.

Quarterback Jeremiah Masoli led the team through its late-season charge, averaging 295 passing yards over the final seven games of the season. However, Masoli struggled early in the campaign, as the Tiger-Cats lost the first two games of the season by a combined 49-14 score.

Masoli sustained a rib injury in the team’s Week 2 loss to the Saskatchewan Roughriders, thrusting backup Dane Evans into the spotlight. The 28-year-old was very effective in his first two starts, leading the Ticats to their first two wins of the season, over the Alouettes and Argonauts. Evans posted a 2-1 record as the starter, throwing five touchdowns and just one interception while averaging 207 passing yards per game.

Despite Masoli leading the team to the playoffs, there has been some discussion on which quarterback head coach Orlondo Steinauer should start against the Alouettes. However, the CFL on TSN Panel believes there should be no debate as to who should be under centre on Sunday.

“Without a doubt, Jeremiah Masoli, he’s your guy,” said Milt Stegall. “But I will say this, if he’s not playing well and you come out of halftime, you may have to make that change to Evans.”

“You watch what they’ve done the past few weeks with the coaching staff and what I’ve seen from Jeremiah this week, I’m going with Masoli as well,” said Davis Sanchez. “It’s pretty evident who they want to start but they’ve got a pretty good guy in the bullpen in Dane.”

“Masoli has been their choice and they’ve anointed him their guy this year,” said Matt Dunigan. “Masoli’s 4-5 on the season while Evans is 2-1. But Jeremiah’s been playing well of late and they’ve got two good ones so you really can’t go wrong.”

Regardless of who starts against the Als, Masoli and the Tiger-Cats sound like they’re ready to capitalize on home-field advantage and are motivated by the possibility of playing for the Grey Cup in front of their home fans.

“We’re going to take full advantage of it,” said Masoli following Hamilton’s season-finale against the Roughriders. “We’re going to come in here and be us and get a good win for the home crowd.”

The Alouettes enter the playoffs having lost three of their past four games, including a deflating 19-18 loss to the Ottawa Redblacks in the final game of the season.

The Als offence has been their calling card all season, averaging a CFL-high 22.4 points and 369.9 yards per game. Running back William Stanback, the team’s nominee for Most Outstanding Player, led the league in rushing with 1,176 yards, 307 more than the next player on the list, Calgary’s Ka’Deem Carey.

Montreal also boasts the star receiving duo of Jake Wieneke and Eugene Lewis, who topped the league with 11 and nine receiving touchdowns, respectively. Lewis finished third in the CFL in receiving yards with 964, while Wieneke finished fifth with 898.

The mid-season acquisition of quarterback Trevor Harris from the Edmonton Elks solidified the Als’ offence as one of the most dangerous in the league. Harris has made just four appearances with Montreal but feels that he has been able to quickly build chemistry with his receiving corps.

“The rate at which we’ve accelerated that curve and gotten on the same page is really uncanny,” said Harris. “The things that need to be ironed out are dwindling more and more. I really feel like we’re close. We’re starting to roll.”

Despite the late-season slide that cost the Als home-field advantage for Sunday’s game, linebacker Patrick Levels has no doubt that Montreal will emerge victorious on Sunday.

“You want to get a first-round bye, but at the end of the day, we’re on the road. So now the approach is to be road warriors,” said Levels. “It’s that simple. We’re going to walk into everybody’s house and take over.

“We’re here. And I’m standing front line and I’ll stand by what I said. We will win in Hamilton. We’re not going anywhere but to the Grey Cup. Masoli, come see me. Brandon Banks, come see me. Come see these Alouettes.”

Masoli and Steinauer were levelheaded in response to Levels’ guarantee, emphasizing their own focus and preparation ahead of Sunday’s game.

“That white noise outside the locker room doesn’t really have an effect on us, or it shouldn’t,” said Masoli. “Our mission is very clear and there are really no distractions that can get in our way. It’s just talk. There’s nothing for us to do about it but show up and execute.”

“They’re a good team. So are we. I respect the process and the build-up to the games that are expected in the playoffs but ultimately you have to play the game,” said Steinauer. “Our focus will remain on our own preparation and what will give us the best chance to win.”

The Tiger-Cats and Alouettes split the 2021 season series 1-1 with each team winning on the road.

Hamilton won the first meeting in Week 4, 27-10 at Molson Stadium in Montreal. Evans threw for 183 yards and two touchdowns while the Tiger-Cats’ defence held Stanback to a season-low 40 yards on 12 carries.

The Als won the second meeting in Week 9, overcoming a 14-point deficit to defeat the Ticats 23-20 in overtime. The Alouettes posted 421 total yards of offence in the victory.

With the season series split down the middle, Stegall believes the Alouettes’ late-season struggles will be their downfall on Sunday.

“I’m going to go with the Hamilton Tiger-Cats,” said Stegall. “I love their two-quarterback system with Masoli and Evans.

“It’s about those Montreal Alouettes. They really disappointed me with what they did in that last game against Ottawa. I know they didn’t have Eugene Lewis. William Stanback didn’t play and some other guys sat down. But the fact that they couldn’t score a point in the second half, and I know it’s not all on Trevor Harris, but it is on Harris because he’s the starting quarterback. So that disappointed me a little bit. They’re going into a hostile environment at [Tim Hortons Field] against the Tiger-Cats, that’s going to be tough.”

The winner of Sunday’s game will travel to Toronto for the East Final against the Argonauts. The Boatmen won the East Division with a 9-5 record and are looking to win a CFL-leading 18th Grey Cup.

The Argonauts went 3-1 against the Tiger-Cats this season, including victories in the final three meetings of the season. They split the season series 1-1 with the Alouettes, dropping the most recent meeting 37-16 in Montreal.

Both teams present unique challenges to the Argos and the CFL on TSN panel of Sanchez, Dunnigan, and Jim Barker debate which club the Argos would rather face in the East Final.

Sanchez: The playoffs are about continuity. I think they’d rather see Montreal because of the continuity the coaching staff in Hamilton has was their quarterbacks. Jeremiah having been there with [Offensive Coordinator Tommy Condell] and Orlondo having been with those guys.

I’ve played in plenty of playoff and championship games and I would rather play the team that doesn’t have as much experience, forget about the roster, it’s about the experience.

Dunigan: I think it’s all about the rosters and who’s playing well right now. I think the Montreal Alouettes have rounded into form and therefore I think Toronto would much rather play a football team, in the Hamilton Tiger-Cats, that they’ve beaten three times already this year and have confidence and know them very well.

I’ll pose a question. Are you more afraid of a Jeremiah Masoli-led team or a Dane Evans-led Hamilton football team? I’m surprised we didn’t see a change there last week. There are some issues there behind centre that need to get ironed out in a hurry for them to be the most feared team by the Toronto Argonauts.

Jim Barker: I think they would much rather play Hamilton than play Montreal. I think Hamilton has a lot of pressure on them. I think that they’ve already lost three times and there are a lot of question marks.

Montreal, you’ve got a team that has a bunch of new guys. They’ve got a new quarterback in there who’s kind of getting hot. They brought in Reggie White to add with Eugene Lewis and Jake Wieneke in the receiving corps. They’re just an interesting team right now.