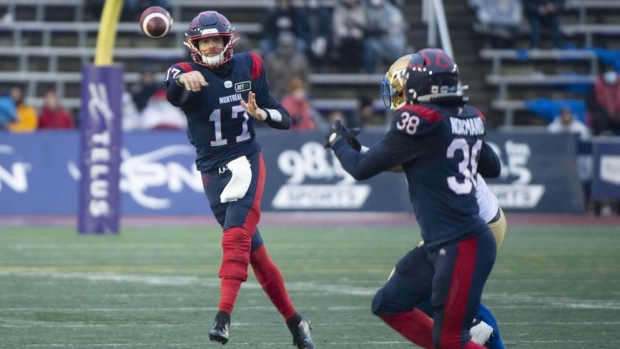 Trevor Harris and the Montreal Alouettes made sure the final week of the CFL regular season was a meaningful one.

Harris threw three TD passes to lead Montreal past the Winnipeg Blue Bombers 28-14 on Saturday. The win, coupled with Hamilton's 31-12 road loss to the Toronto Argonauts, resulted in the Alouettes (7-6) and Tiger-Cats (7-6) being tied for second in the East Division.

Both teams will have something to play for this weekend, as the second-place finisher will host the third-place team in the East Division semifinal Nov. 28.

Toronto (9-4) clinched first in the East with the win over Hamilton. The Argos face either Montreal or the Ticats in the conference final Dec. 5 at BMO Field.

Hamilton controls its playoff destiny. Although the two teams split their season series, the Ticats hold the tiebreaker based upon point differential and will gain the higher seed if they finish the regular season tied with the Alouettes.

Hamilton will know what it needs to do Saturday afternoon when it hosts the Saskatchewan Roughriders (9-4) as Montreal will visit the Ottawa Redblacks (2-11) on Friday night.

Second place in the East is all that's left to be decided. The defending Grey Cup-champion Bombers (11-2) clinched first in the West weeks ago while Saskatchewan (9-4) cemented second with a 29-24 victory Saturday over Edmonton (2-10).

And Calgary (7-6) clinched third spot with a 33-23 win over B.C. on Friday that also eliminated the Lions (4-9) from post-season contention. The Stampeders are in the CFL playoffs for the 16th straight season.

Montreal is looking for a fourth straight win this season over Ottawa. The win over Winnipeg was the Alouettes' first in three games.

The Redblacks come off the bye week riding a six-game losing streak.

The loss to Toronto was Hamilton's first in four games overall. The Ticats lost their only other meeting this year with Saskatchewan, but that 30-8 defeat came Aug. 14.

And while the Roughriders have won four straight, a bigger concern for the club will be ensuring its key players are healthy for the West Division semifinal contest versus Calgary on Nov. 28.

At Montreal, the Alouettes must win to have any shot at second in the East and a home playoff game. And although Harris had three TD passes versus Winnipeg, he threw for 144 yards while the Als' defence intercepted rookie Sean McGuire four times in his first CFL start for Winnipeg. Ottawa is 0-7 versus conference rivals this year.

At Vancouver, Edmonton finishes up with its third road game in just under a week. And while both of the Elks' wins this year have come on the road, three different stops in less than a week is asking a lot. B.C., at least, has the luxury of staying put this week and head coach/co-GM Rick Campbell has said his club wants to finish its season strong.

At Hamilton, the Ticats will know before kickoff how meaningful this contest will be. But they do know they'll face Montreal in the East semifinal Nov. 28. Saskatchewan is also aware of what lies ahead, having already clinched second in the East and home field for the conference semifinal versus Calgary.

At Calgary, Winnipeg has already clinched top spot and home field for the West final while the Stampeders will visit the Roughriders in the semifinal Nov. 28. If both teams give their backups playing time, the Stamps would appear to have an edge with Jake Maier but it's hard to imagine the Bombers wanting to head into their break on a two-game losing streak.