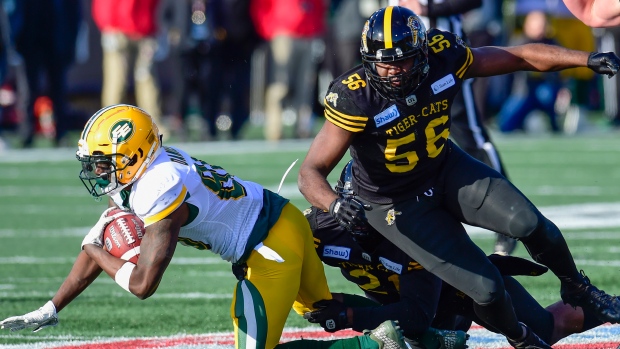 Ja'Gared Davis is sticking around in Steeltown.

The Hamilton Tiger-Cats announced on Thursday that the club has re-signed the 30-year-old defensive end.

"Ja'Gared has uncanny abilities to affect football games and his presence contributes greatly to the locker room with his teammates," Ticats head coach Orlondo Steinauer said in a statement. "JG constantly gets after opposing quarterbacks and has an exceptional knack for making plays. We are pleased Ja’Gared and his family have decided to remain with the Hamilton Tiger-Cats."

In 17 games with the Ticats in 2019, Davis recorded 54 defensive tackles, three forced fumbles, a fumble recovery and 13 sacks - the second-most in the Canadian Football League. He was recognized as an East All-Star for his efforts.

Prior to joining the Ticats, the SMU product spent three years with the Calgary Stampeders.

Davis has played in the last four Grey Cups, winning the 2018 game with the Stamps.