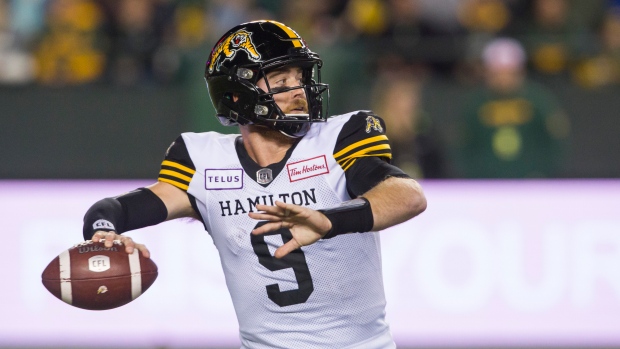 There really is no place like home for Dane Evans and the Hamilton Tiger-Cats.

Hamilton (11-3) hosts the Edmonton Eskimos (7-7) on Friday night in its first home game in over a month. The Ticats return after three straight road contests and play at Tim Hortons Field for the first time since a 38-27 victory over the Toronto Argonauts on Sept. 2.

The Ticats went 2-1 on their three-game tour of the West Division, defeating Edmonton 30-27 on Sept. 20 and Winnipeg 33-13 last weekend. Hamilton dropped a 19-18 decision in Calgary on Sept. 14, a contest the Stampeders clinched with Tre Roberson's block of a Lirim Hajrullahu 42-yard field goal attempt in the final minute.

Hamilton remains firmly atop the East Division standings, eight points ahead of second-place Montreal (7-6). The Ticats have already clinched a post-season berth, but can secure first — and home-field advantage for the conference final — with a win over Edmonton and Alouettes loss or tie to Calgary on Saturday afternoon.

Hamilton is 6-0 at Tim Hortons Field., the only CFL team with an unblemished home record. Edmonton is 3-4 away from Commonwealth Stadium.

Lawrence also has four sacks and two interceptions for a Hamilton defence that's allowing a CFL-low 18.8 offensive points per game and recorded 41 sacks. Evans, who's 6-2 as the starter since incumbent Jeremiah Masoli suffered a season-ending knee injury, also has the Ticats' offence purring. The unit leads the league in offensive points (27.1 per game) and TD passes (23), stands tied for second in offensive TDs (37) and is second overall in completions (339) and net offence (379.8).

Evans has amassed four straight 300-plus yard passing performances and five overall. He had a career-high 442 yards versus Toronto last month.

Logan Kilgore is expected to make a third straight start for Edmonton with incumbent Trevor Harris (upper-body injury) on the six-game injured list. Kilgore finished 19-of-28 passing for 223 yards and a TD in last week's 21-16 road win over Ottawa while rushing for 17 yards and a touchdown.

Kilgore completed 22-of-36 passes for 223 yards with two TDs and three interceptions in Edmonton's loss to Hamilton on Sept, 20. He added 15 rushing yards and a touchdown.

The Eskimos can also cement a post-season berth with a victory.

At Montreal, Calgary (9-4) comes off the bye week in a three-way tie for top spot in the West Division. The Stampeders have won four straight, their last being a 23-16 road victory over Toronto on Sept. 20. Starting quarterback Vernon Adams Jr. returns to the lineup for Montreal (7-6) after missing last week's heart-breaking 25-23 loss in B.C. due to suspension. The Als can clinch their first home playoff game since '14 with a win or tie. Adams Jr. led the Als to a thrilling 40-34 overtime win at McMahon Stadium in August, but the reigning Grey Cup champs were minus starting QB Bo Levi Mitchell.

At Regina, both teams have clinched playoff berths but the winner captures the season series and tie-breaker if they end the year with identical records. Saskatchewan (9-4) has won two straight and eight of their past nine and stands 6-1 at home. Winnipeg (9-5) has dropped its last two games and has also played once more than both Riders and Calgary. The Bombers are also 2-3 under backup quarterback Chris Streveler after starter Matt Nichols suffered a season-ending shoulder injury. Streveler is a solid runner but has more interceptions (eight) than passing TDs (six).

At Vancouver, the Lions (4-10) chase a fourth straight win after holding on to beat Montreal 25-23 last weekend. Mike Reilly was 30-of-34 passing for 309 yards and a TD and interception but B.C.'s defence allowed 425 net offensive yards. Toronto (2-11) comes in having lost two straight and five of its last six. James Franklin was 21-of-30 passing for 208 yards with a TD and two interceptions last week versus the Riders while being sacked six times his first start in 10 games. The expectation is Franklin will get a second straight start.

This report by The Canadian Press was first published Oct, 2, 2019.