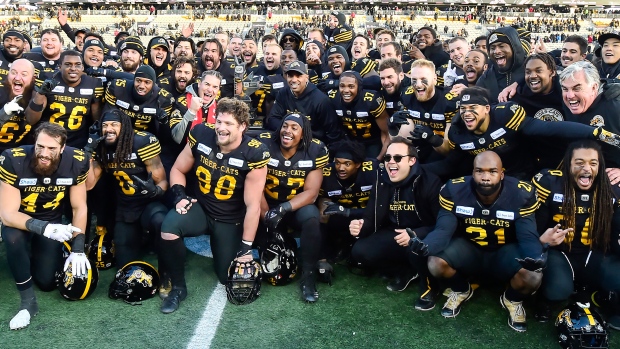 HAMILTON — It's taken five years but Brandon Banks and the Hamilton Tiger-Cats are returning to the Grey Cup.

Banks had four catches — two of the acrobatic variety — for 100 yards and a TD as Hamilton dispatched the Edmonton Eskimos 36-16 in the East Division final Sunday afternoon. That secured the Ticats their first Grey Cup berth since their heart-breaking 20-16 loss to the Calgary Stampeders at B.C. Place Stadium.

That defeat was especially hard on Banks, who had a dramatic 90-yard punt return TD with 32 seconds remaining erased by penalty. And Sunday's victory was also redemption for Banks, who missed Hamilton's 46-27 loss to Ottawa in last year's East Division final with a collarbone injury.

"You could say that," said Banks, a finalist for the CFL's outstanding player award. "I was definitely playing with an extra chip on my shoulder but my goal was to get to the Grey Cup with an opportunity to win.

"It ('14 Grey Cup) is not really on my mind but obviously I'm not going to lie, I've thought about it. I'm never going to forget that moment, I remember it like it was yesterday. But it's a new year, new challenge, new things going on around there . . . I'm moving on and trying to win this Grey Cup."

Hamilton, which finished the regular season with a CFL-best 15-3 record, last won the Grey Cup in 1999 — the league's second-longest drought. The Ticats will face the Winnipeg Blue Bombers in Calgary next Sunday.

Hamilton's Dane Evans was 21-of-36 passing for 386 yards and a TD in his first CFL playoff start. More importantly, he improved to 10-2 as Hamilton's starter before a sun-drenched Tim Hortons Field-record sellout of 25,177 that was predominantly clad in Ticats' black and waved gold rally towels throughout.

"I'll never forget that," Evans said of seeing the sea of black in the stands. "We have the best fans in the CFL."

Edmonton had a glorious chance to make it interesting when Godfrey Onyeka recovered Luke Tasker's fumble at the Hamilton 36-yard line 2:30 into the fourth. But the Eskimos had to settle for Sean Whyte's 30-yard field goal at 5:11 to cut the Ticats' lead to 28-13.

David Watford cemented the Hamilton win with a two-yard TD run — his second of the game — at 8:09. But Evans said the Ticats aren't content with merely going to the Grey Cup.

"It's a feeling of satisfaction a little bit but it's weird because I know we've still got one more that we have to win," he said. "We left a lot of points on the field so we have a lot of work to do next week.

"Dane is a winner . . . he's meticulous," Steinauer said. "As a backup he prepared like he was starting while also being Jeremiah's No. 1 supporter.

Edmonton starter Trevor Harris, facing Hamilton for the first time this season, was 29-of-41 passing for 319 yards with a TD and two interceptions while being sacked three times. Harris completed 36-of-39 attempts — including a CFL-record 22 straight — for 421 yards and a TD in last weekend's 37-29 East Division semifinal win over Montreal.

Edmonton was attempting to become the first crossover team to reach the Grey Cup since the concept was introduced in 1996. West Division teams are 0-5 all-time in the East Division final, with the Eskimos dropping to 0-3.

Crossover teams have played in 17 games and are 5-12 all-time with all the victories coming in the semifinal round (5-7).

"No excuses, we just got beat by a better team," said Edmonton head coach Jason Maas. "They've won 15, 16 games now for a reason, they're tough to beat at home.

"Had we played our best and lost I would feel even worse. Hats off to them . . . they made the plays that are necessary to win this game. They're well coached, they have a great team here and are East Division champs for a reason."

Hamilton improved to 10-0 at Tim Hortons Field and became the eighth team in CFL history to finish the regular season unbeatean at home. The Ticats become the fourth such squad to reach the Grey Cup but first since '09 Montreal Alouettes.

Lirim Hajrullahu's 34-yard field goal at 10:45 of the third increased Hamilton's lead to 28-13. It came after Edmonton surrendered the safety at 7:03.

Hamilton put Edmonton into a real bind when Hajrullahu's 41-yard field goal on the final play of the second quarter staked the Ticats to a 23-13 half-time lead. The Eskimos came in a dismal 1-9 this season when trailing at the half.

Harris was 15-of-20 for 158 yards with a TD and interceptions as Edmonton had the ball for over 17 minutes through two quarters Sunday.

Daniels pulled Edmonton to within 13-7 with a 21-yard TD grab to cap an eight-play, 75-yard drive at 2:34. But Hamilton countered with Banks' circus 47-yard touchdown catch at 4:13 to go ahead 20-7 as the Ticats had scored on four straight possessions.

Watford scored on third-and-two at 7:55 following Frankie Williams' fumble recovery and return to the Edmonton 31-yard line. Then following an 11-yard Hugh O'Neill punt — that went for a one-yard net due to penalty — Hajrullahu connected on a 19-yard boot at 13:35.

"Even when the momentum swung a little bit we were able to respond . . . I think we made timely plays consistently on offence."

This report by The Canadian Press was first published Nov. 17, 2019.

Note to readers: This is a corrected story. A previous version had the wrong team listed in the headline.