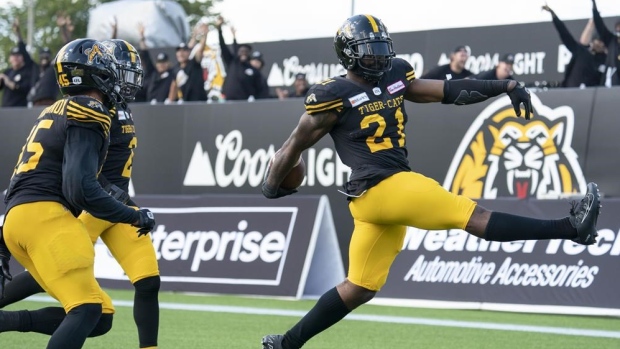 Simoni Lawrence and the Hamilton Tiger-Cats don't need to be reminded about what's at stake.

Hamilton hosts the Montreal Alouettes in the East Division semifinal Sunday. And with the Grey Cup game scheduled for Tim Hortons Field on Dec. 12. the Ticats are attempting to become the first team to capture the CFL title at home since the 2013 Saskatchewan Roughriders.

Adding to the of anticipation is the fact that CFL teams didn't play in 2020 due to the COVID-19 pandemic.

"I think it (chance to win Grey Cup on home soil) is something that's already understood, especially with the whole pandemic last year," Lawrence said. "Being an elite athlete, you're always like, 'Oh I'm untouchable, nothing can happen to me, I'm going to keep going,' and then, boom, something happens.

"I think with 2020 (and) no football for many of us, a lot of guys aren't taking anything for granted. It's hard to win football games so when you give yourself an opportunity to win a championship, I think a lot of guys are locked in and ready to go."

The '21 season has been a solid one for Lawrence, 32. The six-foot-one, 231-pound linebacker registered 73 tackles, four sacks, three interceptions (two returned for touchdowns) and was named the East Division's top defensive player for a second straight season and third time in his career.

Lawrence was a finalist in both 2019, losing to Winnipeg's Willie Jefferson, and 2015, losing to B.C.'s Adam Bighill. Bighill, who now helps anchor the Bombers' top-ranked defence, is the West Division's nominee for the award.

Lawrence was named an East Division all-star for the fifth time and earned Hamilton's nomination as its outstanding player, a career first. And this year, the Upper Darby, Pa., native became the Ticats' all-time tackles leader (609 and counting).

"Sitting out in 2020 was super different and stressful," Lawrence said. "Just having the opportunity to be out here in Canada doing something you love and competing for a championship, (that's) the ultimate goal.

"I think this is just a super-humbling experience and I love the feeling."

Especially suiting up for playoff games at Tim Hortons Field.

"Playoff games in Hamilton are amazing," said a beaming Lawrence. "The fans dressed in all black.

"You can't hear anything on defence, especially on second and long. It's a rush of exhilaration that goes through your whole body."

A fact not lost upon Ticats' defensive lineman Ja'Gared Davis.

"Hamilton has some of the best fans I've had the opportunity to play football in front of, even play against at one point and time," said Davis, a former Calgary Stampeder. "We feel that energy . . . it's an extra boost when you see fans out there screaming at the top of their lungs.

Lawrence's on-field play and outgoing personality have made him a fan favourite in Hamilton. However, he's also been long regarded as one of the CFL's top trash-talkers and often despised by opposing players and fans.

"People who've been around practice know he doesn't leave being great to chance," Ticats head coach Orlondo Steinauer said of Lawrence. "He comes out and he works.

"As vocal as he may seem to everybody else, there are times where he really does lead by example and goes out and handles his business."

"Not to miss any practices," he said. "I feel like if I don't miss practice in the year then everything else is going to take care of itself."

Much was expected this season from Hamilton after posting a franchise-best 15-3 regular-season record. But the Ticats' championship aspirations ended abruptly with a 33-12 loss to the Winnipeg Blue Bombers in the Grey Cup game.

Hamilton (8-6) finished second in the East Division standings behind the Toronto Argonauts (9-5). Montreal (7-7) was third.

Lawrence and Co. will face a Montreal offence that averaged a CFL-best 144.5 rushing yards per game. Anchoring the unit is running back William Stanback, the East Division's outstanding player who ran for a league-high 1,176 yards.

"It's always important to stop the run, especially when you're going against Montreal," Lawrence said. "They're not hiding anything about what they like to do."

"You know when you have a running back like that you have to feed him," Davis said. "Anytime he steps on to the field you know he has to be accounted for at all times.

"He deserves his respect and we know when we play against that type of person and calibre of running back, you have to come with your 'A' game."

However, it's unclear if receiver Eugene Lewis (62 catches, 964 yards, nine TDs) will play. Lewis didn't practise Thursday due to a hip ailment.

"Just me as a fan looking from the outside in, I think No. 87 (Lewis) is a really good football player," Lawrence said. "He catches everything that's thrown his way, he's a competitor, he fights for everything and he plays tough.

"And to me that's like their engine. I think he's the guy that gets them going."

This report by The Canadian Press was first published Nov. 26, 2021.