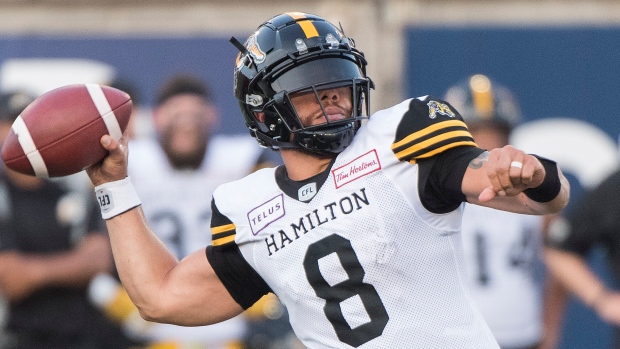 The Hamilton Tiger-Cats got off to a great start this past season before disaster struck in late July. Jeremiah Masoli suffered a season-ending knee injury and just like that the Ticats’ chances were in the hands of backup Dane Evans. Four months and a Grey Cup appearance later and Evans is an emerging star and the Ticats have a decision to make at quarterback this off-season.

TSN’s CFL Insiders Dave Naylor and Farhan Lalji reported over Grey Cup Weekend that while the team has Evans under contract for the next two seasons and Masoli is a pending free agent, the Ticats want both QBs back in the fold next season.

“Hamilton is set with Dane Evans. He has two years left on his contract at a reasonable number so that’s a very good situation for the Ticats going forward,” Naylor said. “They would like to have Jeremiah Masoli back. He started the season as their No. 1 quarterback, had an ACL injury at the end of July, and not 100 per cent certain when he’ll be ready to play, but the Ticats want him back in the fold. They believe this is a two-quarterback league.”

In six games for the Ticats this season, the 31-year-old Masoli finished with 1,576 yards, nine touchdowns, and seven interceptions on 125-175 passing. The seven-year CFL veteran was an East Division All-Star in 2018 after throwing for 5,209 yards, 28 touchdowns, and 18 interceptions.

“Masoli loves it (in Hamilton). He believes that he’s been part of the building process and he wants to find a way to stay,” Lalji said. “Hamilton would like to find a way to bring him back here as well but the injury history is going to play a big factor because he believes he’ll be ready to start next training camp, the Ticats aren’t so sure.”

Evans took over for an injured Masoli and started the last 12 games of the regular season, finishing with 3,754 yards, 21 touchdowns, and 13 interceptions on 298-413 passing.