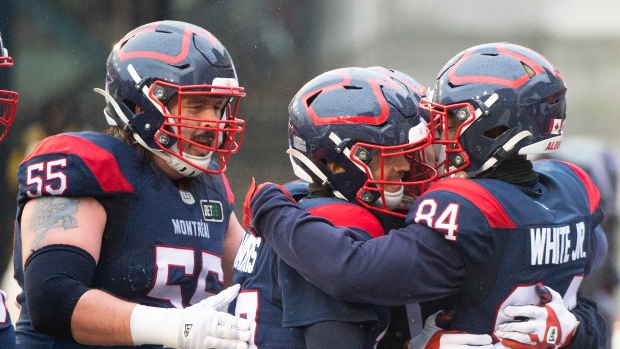 MONTREAL — Trevor Harris is starting to feel comfortable in his new surroundings.

And the Alouettes are reaping the rewards.

The veteran quarterback threw for 138 yards and three touchdown in sloppy conditions Saturday as Montreal beat the Winnipeg Blue Bombers 28-14.

"Being here three weeks and learning the offence, learning what we're doing, you could tell why he's had the success he's had over his career," Alouettes head coach Khari Jones said. "It's been fun working with him. Hopefully we can continue."

"It's Week 2 in terms of working with this offence ... so I've still got a lot to learn," Harris said. "It's about (continuing) to learn and keep getting better."

The 35-year-old credited his receivers with helping him to quickly gel with the Montreal's attack.

"They just have a great sense for reading coverage, feeling zones, feeling voids and how to run out of routes," Harris said. "It's made it a seamless transition.

Filling in for CFL passing leader and Bombers No. 1 quarterback Zach Collaros, who was rested with the West Division's regular-season crown sewn up, Sean McGuire had a miserable afternoon in his first professional start.

"It was a tough game," McGuire said. "It's disappointing."

"I'm sure he's not happy with the outcome," head coach Mike O'Shea added. "But I think he should be looking at it in a positive light.

"He got those snaps under his belt, he'll learn from them and he'll be better."

The Alouettes (7-6) fell behind early, but regained the lead and held on late at rain-soaked Percival Molson Stadium to pick up a crucial victory.

David Cote added two field goals for Montreal, which is battling the Hamilton Tiger-Cats to host the East Division semifinal when the playoffs begin later this month.

"I don't care what they looked like or who they lined up," Jones said of Winnipeg. "We played pretty good football all the way around.

"Guys were flying around, I don't think we had a penalty on special teams, the defence did what they were supposed to do, and we put the ball in the end zone. It was a solid game."

Montreal will need to win Friday against the last-place Ottawa Redblacks and hope for a Hamilton loss to the Saskatchewan Roughriders next Saturday in order to host a playoff game.

After Montreal returner Adarius Pickett fumbled the opening kickoff and the Bombers recovered, Winnipeg running back Brady Oliveira ran in the game's first points on the third play from scrimmage before Sergio Castillo missed the extra point.

Najee Murray then intercepted McGuire on Winnipeg's 20, and Harris made the visitors pay with a 13-yard touchdown pass to Eugene Lewis for a 7-6 lead.

"I'm not looking at the lineup as anything but the lineup we came here with, that we thought we were gonna win the game with," O'Shea said. "You win and lose for very specific reasons, and this one was probably turnover ratio. Turnover margin hurt us."

The Alouettes added to their advantage when Harris found Lewis with a 10-yard touchdown strike in the second quarter. Lewis tied teammate Jake Weineke with a league-leading ninth touchdown of the season.

Cote kicked his first field goal in the third quarter to make it 17-7 for the home side.

Winnipeg returner Shaquille Cooper fumbled on a kickoff in the fourth quarter, and the Alouettes responded by taking a 24-7 lead on Reggie White Jr.'s second TD in a Montreal uniform.

McGuire then tossed his first professional touchdown to cap an explosive two-play drive. The quarterback fired a 42-yard pass to Kenny Lawler and a 32-yard strike to Darvin Adams, cutting Montreal's lead to 10 points.

But Cooper bobbled a punt return — his second flub of the afternoon — forcing the Bombers to concede a point.

Cote then capped things by kicking his 30th field goal of the season to seal the 28-14 final.