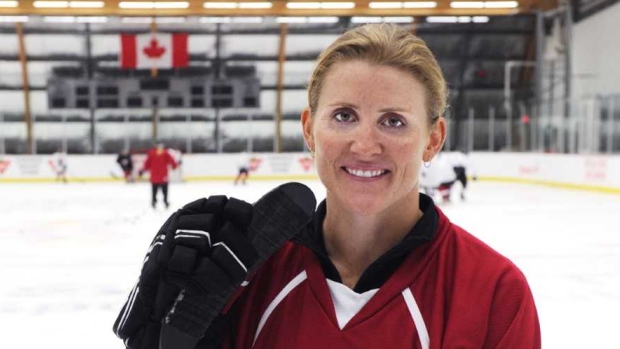 It’s difficult to find a person in the hockey world busier than Hayley Wickenheiser.

The four-time Olympic gold medallist is the senior director of player development for the Toronto Maple Leafs, a medical resident in Toronto and can now add ambassador for Canadian Tire’s ‘Puck Pass Challenge.’

“This year in the lead up to the Beijing Games starting today [Jan. 31] through Feb. 18 they’ve created a contest called the ‘Puck Pass Challenge’ where Canadians from coast-to-coast can upload their favourite video of themselves doing some crazy or fun puck-handling move,” Wickenheiser told TSN.

“[Then they get] a chance to get entered into the top 15 to be chosen to be featured the Winter Olympic Games in a commercial that includes many Canadian athletes like Mitch Marner, Natalie Spooner, Alex Bilodeau, myself, Ron MacLean, a variety of Canadian winter athletes as well as Paralympians.”

The commercial will run through the duration of the Olympics and for each video that’s uploaded, Canadian Tire will donate $1 to Jumpstart, the Canadian Olympic Committee and the Paralympic Foundation of Canada up to $300,000.

The Olympic women’s hockey tournament kicks off on Feb. 3 and for the first time since the 2002 Winter Olympics in Salt Lake City, Canada comes in as the reigning silver medallists. After a Canadian streak of four consecutive Olympic gold medals, the United States took home gold in 2018 in PyeongChang with a 3-2 shootout win over Canada.

In 1998, Wickenheiser was a part of the Team Canada squad that took silver in Nagano. She has experienced first-hand the difference in mentality going into the Olympics as either the defending champions or silver medallists.

“I think it’s always easier to be the hunter than the hunted,” said Wickenheiser. “And it’s a far less pressured position to go in as the non-reigning gold medallists. When we were going for 1,2,3,4 gold in a row, the rest of the world is just trying to knock you off.

Since retiring from the national team in 2017, Wickenheiser’s post-playing career has consisted of medical school and being part of the development staff for the Maple Leafs.

When she first took the role with the NHL team, she was still in the midst of medical school in Calgary and would be flying to Toronto up to five times a month. Now, she is doing her residency in Toronto and is in the city full-time and in 2021 she was promoted to senior director of player development for the Maple Leafs.

“I really enjoy it,” said Wickenheiser of her role. “Because part of what I loved about the game and being a player was every day trying to find that little extra one per cent to become better and I like to help players do that.”

Off the ice, Wickenheiser can be found doing rotations at the hospital as she works towards completing her residency, with her interest geared towards the emergency department. Having the dual roles forces Wickenheiser to make sure she takes time to mentally prepare.

“I’m a very good compartmentaliser,” she said. “I just have to be by the nature with what I’ve done but that does trigger a day recently where I worked through the night in obstetrics. I think I had two deliveries through the night and I didn’t get much sleep and then my shift finished at nine in the morning and then I drove straight to the rink and I was on the ice in the morning.”

Having worn the ‘C’ on numerous occasions over the years for Team Canada, including the 2010 Olympics in Vancouver, Wickenheiser has honed her leadership skills over the years and has had to apply them to her current roles both with the Maple Leafs and in the hospital setting.

“The hockey world as well as medicine is all just about people and relationships,” said Wickenheiser. “I think medicine has really helped me in some of those areas with learning empathy on a whole other level than you’ve ever experienced in sport, where people are going through the worst day of their lives, the worst time, learning how to really listen to gather information.”

And when it comes time for Wickenheiser to recharge her batteries, she turns to the thing she knows best.

“When I have bad days, which happen every once in a while, for sure, for me I’m fortunate that I can just go out on the ice and there’s lot of free ice around and I just like going out on the ice and skating and shooting pucks,” she said.

“For me, it’s fitness and training and working out but being on the ice there is some sort of freedom and joy that’s always been there my whole life and it’s like my happy place that I can get grounded.”